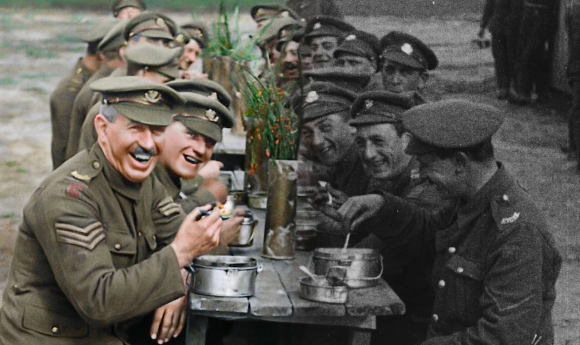 Below are reviews of several big-screen options you’ll have during the month of February as well as release-dates of other films.

They Shall Not Grow Old – Fix Rating … 9/10
By using rotoscoping, high tech audio editing, and epic cinematic story-telling skills, Oscar winning director Peter Jackson weaves together a tale of World War I British infantry. The sincere effort provides a new perspective on the battlefield experience. It’s a humbling, significant achievement, one that may frustrate some viewers and enchant others. Regardless, the emotional impact is undeniable.

Jackson combed through 600 hours of audio interviews with World War I soldiers in order to seamlessly patch together the harrowing story of British infantry fighting in France. With uninhibited access to the Imperial War Museum (IWM) and BBC archives, he decided to treat still images and film material with the highest technology available.

Not only do we get enhanced footage, but the techniques colorize and add great detail. It’s quite a job, and the result ranges from breathtaking to off-putting. The effects are strange and haunting and presented in immersive 3D.

But as much as the cinematic techniques may be distracting and questioned by some viewer, the narrative is an insightful gift. Told exclusively through the voices of the infantryman, we hear from those that experienced the horrors of war. And the precision is stunning.

Never Look Away – Fix Rating … 8/10
In Atlanta theaters on February 15 is the Oscar nominated “Never Look Away.” From director Florian Henckel von Donnersmarck (“The Lives of Others”) this historical drama is about a German artist named Kurt Barnert (played by Tom Schilling), who escapes East Germany for the West but is haunted by his childhood under Nazi rule. A moving and superior production from top to bottom, it’s nominated for best foreign language film and received a nomination for multiple Oscar nominee (see “The Passion of the Christ”) Caleb Deschanel’s excellent cinematography.

The Saint Bernard Syndicate – Fix Rating … 6/10
When Frederik (Frederik Cilius Jørgensen) runs into Rasmus (Rasmus Bruun) at an old school function, he immediately pitches his nerdy and introverted ex-schoolmate on a risky business idea. A failed entrepreneur, Frederik’s track record has alienated him from his family and friends. But this new idea, at least theoretically, could work. Frederik wants to bring the joy of Saint Bernard ownership to the people of China, and he intends to raise the cash in order to construct a large-scale breeding facility there.

Funny and, at times, touching, director Mads Brügger has a difficult time maintaining the saucy tone as Rasmus struggles with a potential life-ending illness. But the culture clash as the two men relocate with their trusty dog, Dollar, to China is good for some meaningful laughs. And the script from Lærke Sanderhoff never takes the safe route, skewering almost everything as the business partners blunder their way through a small fortune while wooing local investors.

Serenity (review) – No Fix Rating … 4/10
Reports are that heads are rolling as “Serenity” failed miserably to catch fire at the box office last month. While industry folks point fingers and play the blame game, much of the fault lies squarely on writer/director Steven Knight’s shoulders. The problem with “Serenity” is that it isn’t very good.

An indescribably odd movie, Matthew McConaughey plays a fisherman trying to catch the big one that got away, even as the world around him keeps erecting roadblocks to his success. Okay, that sounds like an interesting drama (in the vein of “The Old Man and Sea”), especially when you see the rest of the cast, which includes Anne Hathaway. But what starts as a stilted attempt to capture the spirit of something like “Body Heat” takes a bizarre science fiction turn. While not uninteresting, this hybrid is a failure from gifted writer/director Knight (see his 2013 film “Locke” instead).

One highly regarded narrative feature is “Murer: Anatomy of a Trial.” The winner of the best picture prize at the Munich Film Festival, the movie focuses on one nation’s attempt to deny their involvement in the Holocaust. The courtroom drama involves the trial of Franz Murer (played by Karl Fischer), a sadistic Nazi war criminal, known as the Butcher of Vilnius.

The Lego Movie 2: The Second Part
A direct sequel to 2014’s hit, “The Lego Movie 2” continues the adventures of Emmet (voice of Chris Pratt) and Lucy (voiced by Elizabeth Banks). Facing down a new threat that is wrecking everything faster than they can rebuild, it is up to Emmet and Lucy to save the day. Of course, Emmet is still rocking the “Everything is Awesome” theme, in various remixes, but his overly positive mood is certainly not the norm. Of note, Jason Momoa gives voice to a Lego version of Aquaman.

Happy Death Day 2U
Things repeat themselves again as Jessica Rothe returns as Tree Gelbman. Plagued by never ending life cycles, Tree is forced to relive her own death over and over again until she breaks the loop. But this time around, Tree finds that dying over and over again isn’t the only thing she has to worry about. The first film was fun, hopefully, the sequel will be equally entertaining.

Alita: Battle Angel
A long gestating high concept science fiction film penned partially by James Cameron, who also serves as a producer, Robert Rodriguez brings the “Gunnm” graphic novel series to the big screen. An existential story, the movie has title character Alita (Rosa Salazar) trying to discover who she is while battling shadowy and dangerous forces. From the look of things, Alita, who is robotically enhanced, can certainly handle herself. Oscar winner and “True Detective” season 3 star Mahershala Ali plays a villain.

How to Train Your Dragon: The Hidden World
The third feature in the franchise (that also includes a television series), “The Hidden World” follows Hiccup (voice of Jay Baruchel) and Toothless on a new adventure to find a secret dragon utopia. In the process, they discover that Toothless isn’t the only Night Fury. The first two were immensely entertaining, so, I’m hopeful for this concluding act.

Jonathan W. Hickman is an entertainment attorney, filmmaker, college professor, and novelist. More about Jonathan can be found by visiting https://filmproductionlaw.com/