The Shopper Kitchen: The Dish on Seafood Gumbo 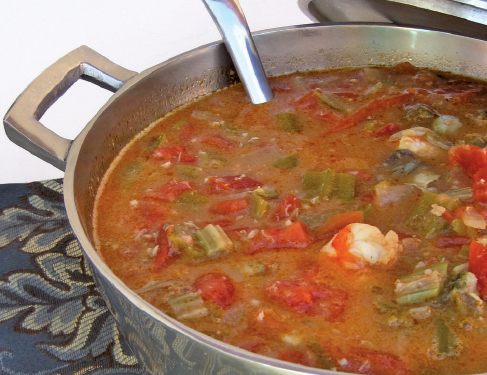 I’m not quite ready to pull out the turkey and dressing recipes in early November, but until then, I do often enjoy a nice hot soup for supper. And since I never met a bite of seafood I didn’t like, I’m especially fond of Seafood Gumbo.

Several years ago, my New Orleans–born husband and I were in Louisiana to visit friends, and I quickly learned that restaurants there serve gumbo as frequently as most home-style Southern restaurants serve biscuits and cornbread. According to Stanley Dry’s “A Short History of Gumbo” for the Southern Foodways Alliance, gumbo—whose name is derived from the West African word for “okra”— is Louisiana’s most famous dish.

I’ve dished up several different versions of gumbo over the years, and one of the most recent ones I’ve tried comes not from Louisiana but from Memphis, Tennessee. I found this recipe in the 1964 Woman’s Exchange Cook Book, Volume 1 from the Woman’s Exchange of Memphis. According to the book, the Woman’s Exchange started as an outgrowth of the community kitchens operated during the Depression and by 1964 had grown into a thriving operation that included a shop with handmade clothing, toys, linens, gift items, fine arts, antiques, and the popular restaurant. It’s still in operation today, and though I’ve never been, I’m so pleased I have their old cookbook to tide me over.

If you’re a gumbo fan too, give this recipe a try. And if you happen to be cooking it later in the month, feel free to toss in a bit of leftover turkey!