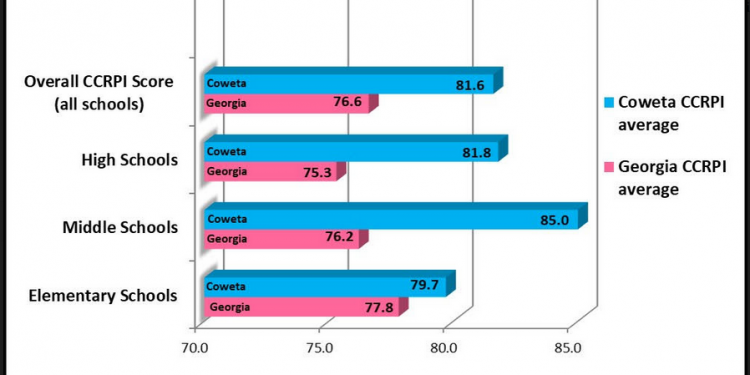 The Coweta County School System has again outscored the state of Georgia on the Georgia College and Career Ready Performance Index (CCRPI).

Coweta Schools outscored the state average by 5 points on the newly-calculated CCRPI, placing Coweta as one of the top-ranking school districts in the annual report.

The CCRPI is Georgia’s annual statewide accountability system.  It scores student performance data on a scale made up of five major areas, including Content Mastery, Progress, Closing Gaps, Readiness, and (for high schools) Graduation Rate. The report compiles a single score reported on a 100-point scale for schools and districts, based on multiple points of student data and weighting systems. This year’s report reflects data from the 2017-18 school year.

The 2018 CCRPI uses an updated calculation approved as part of Georgia’s state plan for the Every Student Succeeds Act (ESSA). Because of this year’s changes, 2018 school and system scores are not comparable to prior year’s CCRPI scores.
As a school district, the Coweta County School System scored an 81.6 on the CCRPI, exceeding the state’s overall CCRPI score of 76.6.

Overall, the Coweta County School System ranked as the 20th highest district in the state of Georgia on the CCRPI, or in the top 10 percent of all school districts listed on this year’s report. Of the top 20 districts appearing on the 2018 report, most are smaller school systems or individual schools.  Coweta County is one of only 5 large school districts (20,000 or more students) in the report’s top 10 percent of high-scoring districts, along with Forsyth, Fayette, Columbia and Gwinnett county school systems.

“These results are indicative of hard work on the part of our teachers, staff, students, parents and volunteers across our school system,” said Superintendent Steve Barker.  “What we see in the CCRPI is consistent with the recent results of our students’ performance on the ACT and SAT. Our schools are providing students with an academic foundation that is nationally competitive, and that in turn is making our school system one of the most competitive in Georgia.”

“No one indicator can provide a complete picture of our school system,” said Barker, who noted that the school system uses a variety of student and school data to develop school improvement strategies.  This year’s CCRPI report also indicates several positive trends in Coweta schools, said Barker.

“Over the past few years, our school system has been very intentional in our efforts to monitor individual student performance and to individualize instruction based on students’ needs.” Said Barker.  “Our teachers, administrators and school system support staff are doing an outstanding job targeting impact areas and then making adjustments to help students improve.”