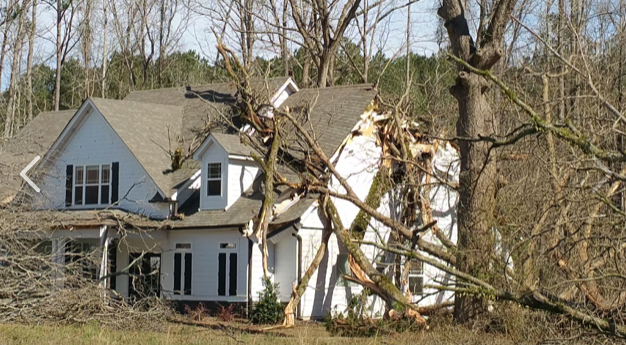 The EF-1 tornado produced winds of around 90 miles per hour and was on the ground for approximately two miles. Though the tornado lasted only three minutes, it uprooted and damaged hundreds of oak, pine and pecan trees as well as downing power lines in the Gordon Road area. One home was damaged in Gordon Oaks Subdivision (on Gordon Oaks Way) when a 100 ft. oak tree crashed through the roof and into the master bedroom upstairs causing significant damage, according to the National Weather Service.

A line of strong thunderstorms moved quickly through Coweta County around 4:30 a.m. Sunday. The tornado formed at 4:33 a.m. at the intersection of Martin Mill Road and Tabby Linch Road and followed an east-northeast path along Tabby Linch Road. It then moved across Gordon Oaks Way and Gordon Road and eventually ended near Moore Road at 4:36 a.m. The path width was measured at 150 yards.

A house on Tabby Linch Road also suffered minor roof damage and a metal roof was peeled off a barn as well. Ironically, no other storm damage was reported with this line of storms prior to or following the tornado.

According to the National Weather Service, emergency alert notifications on cell phones awoke several residents in the area of the tornado. The residents of the damaged home in Gordon Oaks Subdivision received the alert just 45 seconds prior to the oak tree damage to the home which allowed them to seek shelter downstairs.