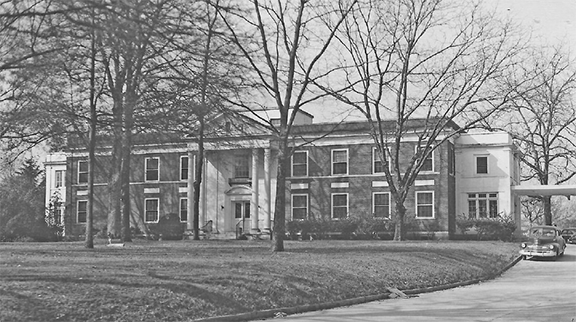 Pictured above is Newnan Hospital, which was built in 1925. It’s presently serves as the Newnan campus of the University of West Georgia.

By JENNY ENDERLIN, Special to The Paper

The Newnan-Coweta Historical Society (NCHS) is preparing to unveil several new exhibits at the McRitchie-Hollis Museum in 2023. In preparation for one room in particular, the board is seeking assistance from local citizens who have information about area hospitals that existed forty years ago or more.

Newnan is well-known for its role as a hospital town for injured Confederate and Union soldiers during the Civil War when several of the large antebellum homes downtown such as Buena Vista and College Temple were pressed into service. However, it is believed that the first dedicated medical facility was a sanitorium founded in 1902 by Dr. T.B. Davis and Dr. W.A. Turner located at 28 West Broad Street. In 1912, a city hospital owned by Dr. Paul Peniston opened at 51 Madison Street, but the structure has since been demolished and little more is known about it.

It was not until 1925 that Newnan Hospital on Jackson Street was created. (The building now serves as a campus for The University of West Georgia.) Originally, it contained two wards—one with four beds for men and one with four beds for women. Over the years, various additions were constructed to meet the ever-increasing demand. By the mid-1940’s, the hospital boasted several dozen beds and a children’s ward.

Regrettably, hospitals were segregated for most of Newnan’s history. At one point a Black hospital was located on Spring Street; any information local citizens can provide pertaining to this facility is especially desired. Because of the Civil Rights Act and the creation of Medicare, hospitals across America were legally supposed to desegregate in the mid-1960s, but oftentimes segregation was still unofficially practiced. Newnanite Clarence Bohannon recalls protests outside of Newnan Hospital calling for the medical staff to treat a Black service member. It is not known when the Black hospital closed or when Newnan Hospital began accepting patients of all ethnicities.

The NCHS is also hoping to learn more about Dr. McWhorter and Dr. Jordan, who died in the 1920s. We also want to find out what Newnan did for a hospital in the late 1800’s, learn more details about the medical facilities of the early 1900’s, including personal stories of the nurses who lived on site and any other staff who worked at one of the hospitals. Local citizens who would like to share information or donate objects or photographs are asked to contact the NCHS at [email protected].

Jenny Enderlin is a local writer who received her degree in English from Florida State University. She is a Marine Corps spouse and a board member of the Newnan-Coweta Historical Society and the Newnan Cultural Arts Commission.