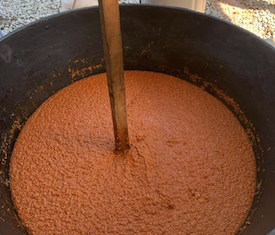 Pictured above – Classic Senoia Brunswick stew, made by Bill Underwood, Carl McKnight, and Jim McKnight along with volunteers and using the traditional local recipe and process, will be served by the Optimist Club of Senoia, along with pulled pork and BBQ sandwiches, on October 16.

The Optimist Club of Senoia will be hosting its annual barbecue on Saturday, October 16.

The barbecue will be held from 10:30 a.m. to 1 p.m. at the Senoia Farmers’ Market located at 40 Travis Street in downtown Senoia. The proceeds from this fundraiser will be used to support local and area youth initiatives.

Food featured at the barbecue will include the traditional Senoia recipe of Brunswick stew, prepared by Bill Underwood, Carl McKnight and Jim McKnight along with Optimists and other volunteers. Pulled pork will be prepared by Gerry Joseph of “1 Smokin’ Guy BBQ.”

You are also encouraged to bring canned goods and non-perishable food items to donate to the local I-58 Mission.

Caregiver of the Month: Kwanza Smith