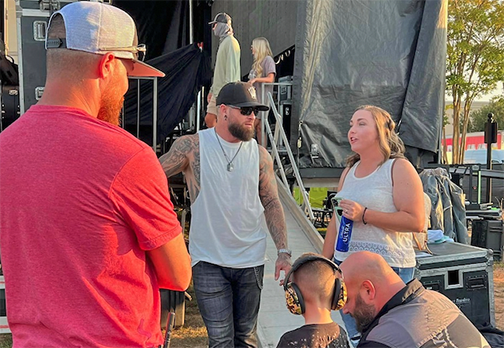 Pictured above: Brantley Gilbert meets with fans at the September 14 Small Town Throwdown Concert in Newnan.

“We’re overwhelmed by the generosity of this community and our sponsors. We can’t thank Brantley Gilbert enough for bringing this concert to Newnan. This was a huge undertaking, and as we saw on Wednesday, he and the other performers pulled it off and made the 2,500 fans here incredibly happy with a fantastic concert,” said CCF Executive Director Kristin Webb.

“After the enormous success of last year’s concert with Alan Jackson, we were thrilled that we could again use the gift of music to entertain Cowetans while raising money for the Coweta Community Foundation,” said Webb. She noted that sponsorship proceeds will “allow us to enhance our community’s quality of life by encouraging philanthropic interaction in Coweta County.”

The presenting sponsor of the concert was Pepsi.

The Foundation’s next grant cycle is now open and runs through October 15, 2022, with awards to be announced in December. To be eligible to apply for and receive a grant, a program must:

Grant funds must be used to support only the activities described in the grant application, and the agency agrees to provide the Foundation with a final written report on the organization’s completion of the project or program.

The Coweta Community Foundation is marking its 25th anniversary this month and will celebrate with a birthday party at Kids Castle Park, the first official initiative of the Foundation in 1997. This free family-friendly community event will feature plenty of fun for kids, a birthday-themed silent auction, and a countywide art contest for K-12 students. The event is set for Sunday, September 25, 2022, from 3-6 p.m. at the Newnan Utilities Carl Miller Park at 74 Sewell Road in Newnan. 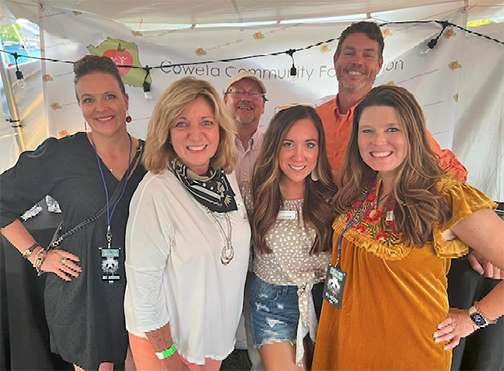 Staff and board members from the Coweta Community Foundation were among those at Wednesday’s concert at Ashley Park. From left are Leslie Davis, Cynthia Bennett, Dean Jackson, Amanda Hand, Blue Cole, and CCF Executive Director Kristin Webb.