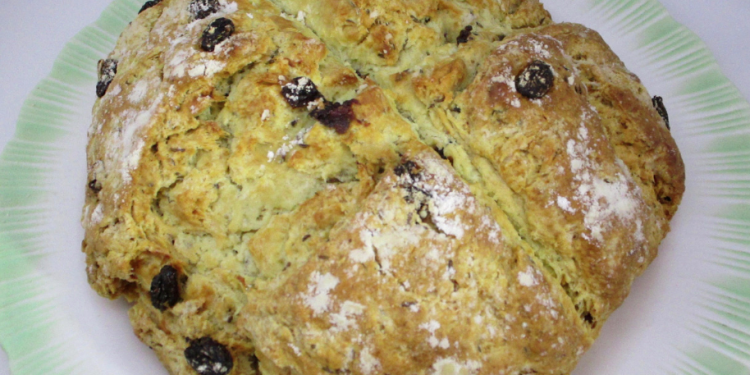 “There is no bread to be had equal to it for invigorating the body, promoting digestion, strengthening the stomach, and improving the state of the bowels.”

Mmm. Are you hungry yet?

That, my friends, was the ringing endorsement for soda bread that was published in the November 1836 Farmer’s Magazine in London, and it was referencing a recipe for soda bread that appeared in a newspaper in County Down, Ireland. The original recipe called for only wheaten meal, salt, “super-carbonate of soda,” cold water, and buttermilk in making the inch-thick cake of bread. This information comes courtesy of the Society for the Preservation of Irish Soda Bread, a group whose existence I was unaware of until recently. But with St. Patrick’s Day around the corner, I’ve been researching all things Irish.

This year, that involved tweaking some recipes for Irish Soda Bread that I’ve tried in the past. I had read that the traditional recipe called for no raisins or caraways seeds, and indeed, the Society confirms this. If it contains more than flour, baking soda, buttermilk, and salt, it apparently isn’t traditional soda bread. The bread became so popular simply because it was the cheapest bread to make, thus the limited list of ingredients.

So while I respect the purists who prefer their soda bread simple, I’m a fan of the gussied-up versions made with raisins or caraway seeds and, now, both.

Since I have absolutely no talent for making yeast breads, I quite appreciate a good “quick bread” recipe, and few recipes are quicker than this one. I mixed up the dough in mere minutes, and in just under an hour, I had a delicious, rustic-looking loaf of (ahem) Irish Soda Bread to enjoy with breakfast coffee or afternoon tea. It’s crusty on the outside and moist on the inside and has just the right amount of sweetness.

Here’s my recipe, but feel free to omit those last two modern additions if you so desire.

Preheat oven to 375 degrees, and lightly dust a large baking sheet with flour.

In a large mixing bowl, combine flour, sugar, baking soda, baking powder, salt and butter. (You may wish to use a pastry cutter to cut in the butter.) Stir in buttermilk and egg. Sprinkle mixture with caraway seeds, then add raisins and combine. Turn dough out onto baking sheet and knead slightly. Form dough into a lumpy, not-too-perfect round about 8 inches wide and an inch or so thick. Use a knife to carve an X into the top of the loaf and sprinkle with a little flour if you like.

Bake bread for 50-55 minutes or until a toothpick inserted into the center of the loaf comes out clean. Yields one loaf.

The Staging Life: What to do about ...