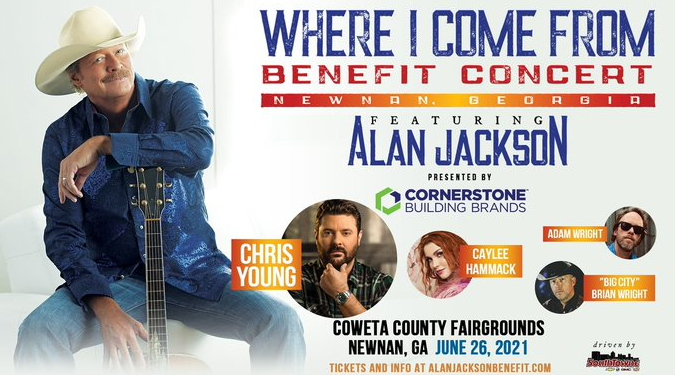 Country Music icon Alan Jackson will return to his hometown of Newnan next month as he headlines a special concert event to benefit relief efforts in and around Coweta County.

Where I Come From: Tornado Benefit Featuring Alan Jackson will find the superstar bringing three decades of hits to the stage in an area recently ravaged and still recovering from a devastating spring tornado. Also appearing will be country music artists Chris Young, Caylee Hammock, Adam Wright and “Big City” Brian Wright.

The June 26 concert will take place at Newnan’s Coweta County Fairgrounds (275 Pine Rd., Newnan GA, 30263). Tickets for the event go on sale Friday, May 21 at 10 am ET via https://premierproductionstickets.com/csc?3643#/. Ticket prices start at $49.99, and pre-sale opportunities will be available.

On March 26, an EF-4 tornado – just shy of the most-powerful ranking on the National Weather Service’s scale – ripped across Newnan…the city where Jackson and his wife, Denise were born, raised, met and married. At least 70 homes were completely destroyed, many others suffered major damage, and – all told – over 1700 structures were impacted and compromised.

Proceeds from Where I Come From: Tornado Benefit Featuring Alan Jackson will benefit the Coweta Community Foundation, which is managing charitable efforts to help the people of Newnan in the wake of the storm. Donations to the Foundation’s relief efforts can be made via their website: https://www.cowetafoundation.org/.

Cornerstone Building Brands is the presenting sponsor of Where I Come From: Tornado Benefit Featuring Alan Jackson. The event is driven by Southtowne Chevrolet.

Alan Jackson’s touring history has taken him all over the U.S. and around the world. His concert performances have been seen by millions in such far-reaching places as Australia, Norway and Brazil; he’s played iconic stages ranging from Carnegie Hall to the Ryman Auditorium. His June Where I Come From concert in the town where this “Small Town Southern Man” grew up will be the latest in his storied line of memorable and notable live concert events.