Ask The County Agent: What is the name of this spaghetti weed in my yard? 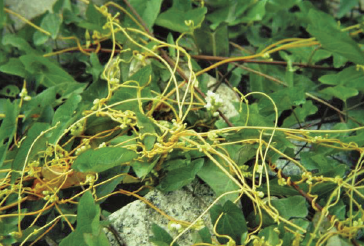 Question:  There is something in my shrubs that looks like spaghetti. What is it?

Agent:  What you are describing is a weed called dodder (Cuscuta spp.). It is a parasitic weed that infects a wide range of herbaceous and woody plants.

I saw it for the first time several years ago when someone brought a sample to my office for identification. I had no idea what it was. The weed fascinated me because it didn’t appear to have a root system of any kind. It looked like it had just appeared out of thin air.   Dodder is a rootless, leafless, parasitic flowering plant. It also lacks chlorophyll, which is what gives plants their characteristic green color, so dodder can appear straw colored, yellow or almost white. It is in the same family as morning glories, and there are about twelve species of it, each one with a different host range.

Dodder germinates in the spring when conditions are favorable and then sends up a tendril that attached to a suitable host plant. Later in the summer, it flowers and produces seed like any other flowering plant. Flowers are small, white or pink, and usually in clusters. The seeds can remain dormant in the soils for years before germinating.

If dodder germinates but no suitable host plant is available, then the plant will die within a few days. However, if it does find a host, then it attaches itself to that plant’s vascular system. At that point, dodder’s root system will die and the parasitic plant will feed entirely off the host.

Dodder infects a wide range of plants including chrysanthemums, marigolds, sunflowers, azaleas, rhododendrons and many other ornamentals. It can also infect alfalfa, clover, soybean, and vetch so people often see it in crops or pastures.

In order to control dodder, you must remove all plants or portions of plants infected. Ideally dodder should be removed before it has a chance to develop flowers and produce seed. To date, dodder cannot be controlled through a selective post emergent herbicide application, but the seed can be controlled by using pre-emergent herbicides. Before using any herbicide, always read the label carefully to make sure it is safe for the host plant and follow all label directions.

Again, to completely remove dodder from a host plant, you must prune out the affected area where dodder is attached to its host. It’s worth noting that if the host plant is killed with a non-selective herbicide, then the dodder plant will also die.

For more information about dodder or other parasitic weeds, email [email protected] or call 770-254-2620 and ask for our weed control publication.