Ask The County Agent: Why are my pine trees turning brown? 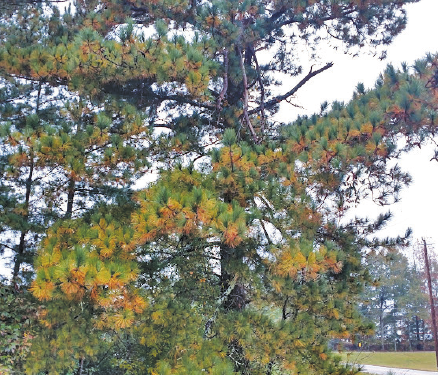 Question: My pine trees are turning brown. What is wrong with them?

Agent:  Surprise! It’s not just deciduous trees that drop leaves. Evergreens do too. Chances are you are watching your pine tree shed its older needles. It happens in the fall and since we had a much later fall than normal, we are seeing this happen later in the year than usual.

Although most conifer trees are considered to be “evergreen,” their needles don’t live forever. What makes them evergreen is that their leaves last more than one year before falling. Since new needles are added every year, there is always an overlap between green needles and those that are due to fall. There is usually no need to be alarmed, since leaf and needle drop often occur as a natural part of the yearly growth cycle of many plants.


Needles of evergreens like junipers, pines or arborvitae shed their oldest leaves or needles in late summer or early autumn. Most pine trees drop their needles in the fall. Some species may drop needles at other times. The natural yellowing of the older needles occurs uniformly from the top to the bottom of the tree. Newer needles at the tips of the branches stay green.

The needles on most evergreens usually last three years, although some juniper needles may last a decade or more. Arborvitae and white pine needles turn brown, yellow or reddish-tan and drop in the autumn of the second year. Arborvitae sheds branchlets rather than needles, which usually turn brown as they age, yet remain on the tree for quite some time before falling.
Broad-leaved evergreens
In the spring, many broad-leaved evergreens like holly or Southern magnolia drop many of their oldest leaves as new growth begins. The older leaves seem to suddenly turn uniformly yellow throughout the entire plant before dropping. The younger leaves at the branch tips remain healthy and green. New growth at the tips of the branches is often evident at this time. No further yellowing or leaf drop should occur once the older yellow leaves drop off.

Other broad-leaved evergreens such as rhododendron, azaleas or euonymus shed their leaves at times of the year other than spring. Leaf drop on these plants usually occurs in the summer or early fall when the leaves are two to three years old. This period of leaf drop occurs following the maturing of the current season’s growth.

Other causes of leaf drop
Various environmental stresses can cause leaf and needle drop of evergreen and deciduous plants. The most common of these is drought or too much soil moisture. A nitrogen deficiency can cause the older leaves of a plant to turn yellow. Air pollution, herbicide injury, insect infestations or disease can all cause similar symptoms.

Fall needle drop is a natural condition and is not a sign of disease or insect infestation. However, any factor that increases stress on evergreen trees will intensify autumn needle drop. If new growth is discolored or entire limbs are turning yellow or brown, then other stresses including insects or disease could be to blame.

For more information, contact the Coweta County Extension office at 770-254-2620 or [email protected].