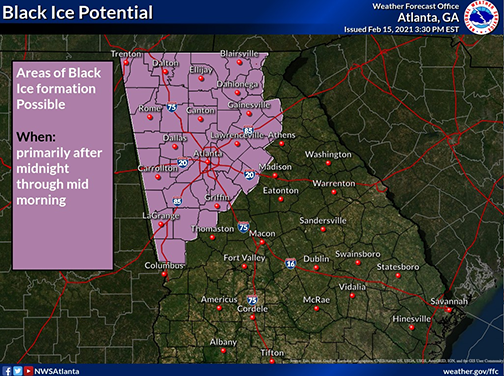 The National Weather Service in Peachtree City has issued a Special Weather Statement stating Black Ice is likely to occur in Coweta County and surrounding areas overnight and into Tuesday morning.

Rain associated with an approaching cold front will be moving through the region this afternoon and evening. Although the temperature is 50 degrees at 4 p.m. today, it is expected to drop to 22 later tonight.

Areas along and north and west of I-85 have the greatest risk of black ice forming. Counties and communities to the south and east of I-85 may see some patchy black ice.

Here’s the latest forecast for tonight from the NWS:

Showers and thunderstorms before 11pm, then a slight chance of showers between 11pm and midnight. Low around 22. Southeast wind 5 to 10 mph becoming northwest after midnight. Winds could gust as high as 20 mph. Chance of precipitation is 80%. New precipitation amounts between a tenth and quarter of an inch, except higher amounts possible in thunderstorms.

The Shopper Real Estate: How to obtain ...