Cecil B. Cornwell named Artist of the Month 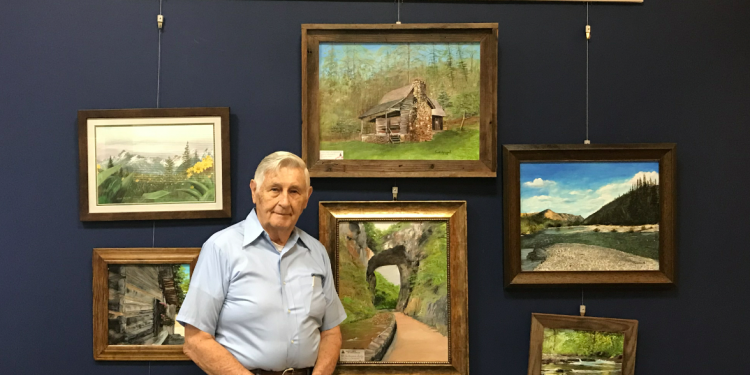 The Newnan-Coweta Art Association selects Cecil B. Cornwell as its featured Artist of the Month for November. Cornwell’s art will be featured in the City Manager’s Office at City Hall until November 29, 2019.

Each month, local artists are named Artist of the Month. The City has collaborated with the Newnan-Coweta Art Association and local art galleries on this project. It gives local artists the opportunity to display their work in City Hall and a chance for the city to support the arts.

About Cecil B. Cornwell
Cecil B. Cornwell, a native of Virginia came to Georgia in 1966, where he completed graduate studies in social work at the University of Georgia.

After graduating from UGA, he began working with the Georgia Baptist Children’s Home, where he spent the next 30 years working to make the lives of children better.

Cecil began drawing and painting in early childhood and became active in the outdoors, learning about nature and wildlife. He especially enjoyed fishing and is still an avid fisherman.

Besides his talent in painting, he also does wood carvings. He enjoys things he is most interested in: fish, birds, turtles, and other items in nature for which he has received orders to do. Because of his painting ability and his observation of life, he can make fish carvings that are very lifelike in appearance. His fish carvings range in size from tie pin size to life-size, and they appear lifelike. He carves many species of fish, including all members of the trout family, as well as saltwater and other freshwater fish.

Cecil and his wife, Maxine, live in Newnan. They have two grown children and three grandchildren. Cecil is active in Central Baptist Church, and he has a wide variety of interests, with a special enjoyment of gardening, photography, and fly fishing. He loves going backpacking in the Wyoming mountains for trout fish and enjoyment of the beauty there.

About the Newnan-Coweta Art Association
The Newnan Coweta Art Association’s general meetings are held the third Thursday of each month from August through May at the Harriet Alexander Art Center on Hospital Road at 7 p.m. An art demonstration is presented each month. Visitors and new members are always welcomed.

TagsArtist of the MonthCecil B. Cornwell
Share:
Previous Article

Why is the Flu so dangerous?