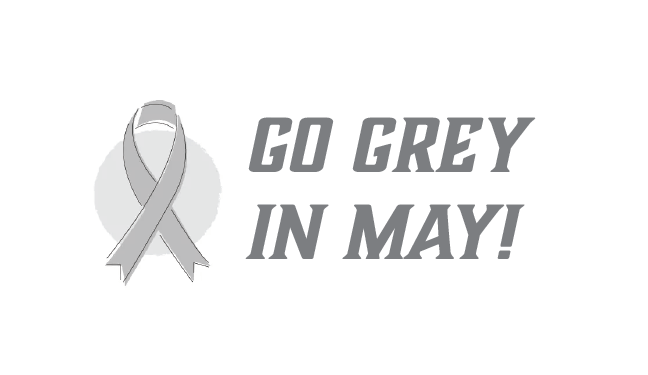 May is National Brain Tumor Awareness Month, and a Coweta nonprofit has decided to “Go Grey in May” this year to raise awareness about brain tumors and other forms of adversity. Go Grey in May is also a reference to the grey ribbon that is the symbol of the fight against brain tumors.

Can’t Never Could, Inc. observes Go Grey in May each year in honor of its founder, Rob Estes. In August 2013, Rob was diagnosed with Grade IV glioblastoma, an aggressive and incurable form of brain cancer. After the removal of a five-centimeter tumor in his right frontal lobe, he lived on for more than four years, and during his fight with glioblastoma, Rob and his family realized the importance of faith, community, perseverance and hope. They also realized the importance of helping others in their times of adversity, so in 2013, Rob and his wife, Christi, started a nonprofit to help those facing similar challenges. The name “Can’t Never Could” was inspired by Rob’s mother. He said that when he was growing up and complained about something he couldn’t do, his mom would always reply, “Can’t never could.”

Kevin Daniell, CNC board chair, notes that “although Rob was diagnosed with brain cancer, which is symbolized by the color grey and is recognized in the month of May, we try to spread the word that Can’t Never Could assists people dealing with all types of cancers, other life-changing illnesses and adversity.”

“In addition to the monthly grants we provide and our support of other endeavors,” he said, “we are able to give scholarships to high school graduates who have had a family member impacted by cancer or who have personally battled cancer, a brain tumor, or a brain injury, causing them financial hardship. Thanks to our supporters’ generosity this year, we were able to assist seven students and had three new schools involved in the process.”

According to the National Brain Tumor Society, which advocates on behalf of the brain tumor community in the United States, over 700,000 Americans are living with a brain tumor, and nearly 89,000 more are expected to be diagnosed with a primary brain tumor in 2022.

To make a donation to the Go Grey in May fundraiser, individuals may visit cantnevercouldinc.com and click on the “Give” tab at the top of the page. For more information, please email [email protected].