Inside Sports: Four inducted into Coweta Sports Hall of Fame 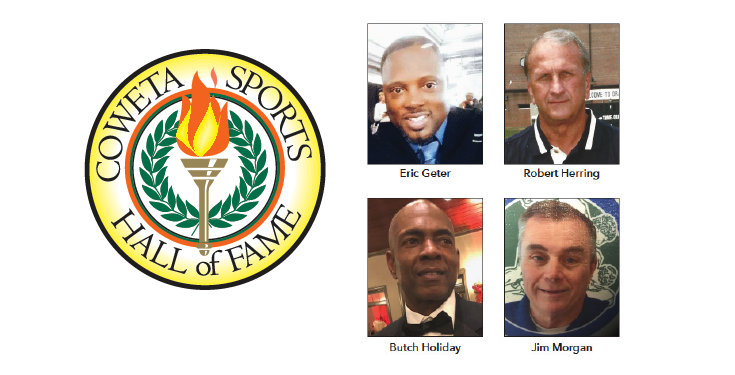 Each member of the Class of 2022 had one common thread – all had athletics success at Newnan High School. The inductees were Eric Geter, Robert Herring, Butch Holiday and Jim Morgan.

The foursome represented the 19th Hall of Fame Class. The Coweta Sports Hall of Fame has inducted a class each year dating from 2003 with the exception of 2021 due to COVID-19.

Geter was born and raised in Newnan and played on NHS teams under Coach Max Bass. The Cougars were 30-13 during his four seasons. As a senior, Geter rushed for 1,281 yards and 16 touchdowns, caught 23 passes for another 371 yards and had 49 tackles with 2 interceptions on defense and was named both All-State and All-American.

He earned a scholarship to Clemson University where he was a three-year letterman, starting as a defensive back and kick-return specialist. Geter signed free-agent deals with the Los Angeles Rams and Denver Broncos in the National Football League before playing three seasons in the Canadian Football League with Las Vegas and Ottawa.

Herring was the Newnan High head football coach for 10 seasons (1999-2008) and led the Cougars to a 71-44 record during that decade. His teams at NHS earned three region championships and appeared in the state playoffs seven times. The Cougars reached the 5A State Semifinals in 2003 and 2008.

Holiday was born and raised in Newnan and played under Coach Max Bass at NHS. He played defensive safety and running back for the Cougars and as a senior, rushed for over 1,000 yards and scored 25 touchdowns in 1978.

After high school, Holiday signed a scholarship with Florida State and played from 1979-1982 for legendary coach Bobby Bowden. He played running back, wide receiver and cornerback during this FSU tenure. Holiday signed a contract to play for the Memphis Showboards of the USFL out of college but an injury ended his playing career.

Morgan graduated from Newnan High in 1972 and was a four-year starter and three-time region champion in wrestling. He attended Georgia Southern University before later competing as a member of the Georgia Tech wrestling team.

He has been involved in wrestling at the youth, middle school and high school levels in Coweta County for more than 40 years. Morgan was the first Coweta County wrestler to win a region championship.

Morgan was on the coaching staff for Team Georgia/USA Wrestling national teams in 1982. He started the Coweta Cobra Youth program in 1980 and has helped train more than 2,000 youth wrestlers, producing many state champions and placers. He was inducted into the National Wrestling Hall of Fame in 2021.

Teams of the Year

In addition to the four inductees, three local squads were recognized as Teams of the Year at the banquet last month.

The East Coweta Lady Indians Softball squad, Newnan High Gymnastics and Trinity Christian School Football were selected as Teams of the Year in 2021.

East Coweta sported a 36-2 overall record on its way to the Class 7A State Championship. The Newnan Gymcats bested Buford and Cambridge to capture the Class 6A-7A State Title. And Trinity Christian rolled to a perfect 14-0 record to win the GHSA 1A Private State Championship.

After coming off a national championship in 2021, the Georgia Bulldogs football squad wasn’t finished.

The Bulldogs set a new NFL Draft record with 15 players being selected in late April’s three-day event. Georgia broke another NFL Draft record with five defensive players being selected in the first round, a mark previously held by Miami (2004) and Florida State (2006). And to top it off, the No. 1 overall draft selection was UGA’s defensive end Travon Walker, selected by Jacksonville.

Falcons get 8 in Draft

The Atlanta Falcons wound up with eight selections during the Draft, taking wide receiver Drake London from Southern California as their first-round selection, No. 8 overall.

Four of the top 10 teams with the most NFL Draft selections came from the Southeastern Conference – Georgia, LSU, Alabama and Ole Miss. The Big 12 and Big 10 had two each.

The Atlanta Braves, fresh off their 2021 World Series Championship, are again off to a slow start to the season.

But it certainly is not as bad of a start as the Cincinnati Reds. Remember, the Reds and Braves split a four-game series to start off the 2022 campaign here in Atlanta. Since then, the Reds have stumbled to a 4-21 mark and are just 6-23 through May 9.

Mr. Personality: May Book of the Month ...