Inside Sports: Road to the Super Bowl, Fun Facts, Coweta Connections and more 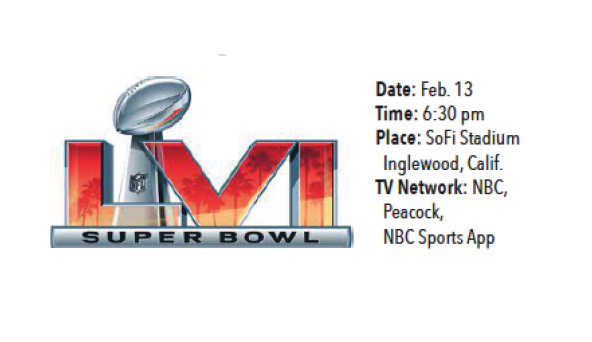 The apex of all sporting events, particularly in this country, is best described as simply “The Super Bowl.” And the road to the Super Bowl starts this weekend with six games in the Wildcard Playoff Round.

This year’s version – Super Bowl LVI – takes place later than any other time, on Sunday, Feb. 13. The reason for further into February is the National Football League added a 17th regular-season game this season, thus pushing back the big game a week later. February 7 had been the latest date on three different occasions, the last was a year ago.

Here’s a look at the NFL playoff lineups for the Wildcard Round.

And speaking of the Super Bowl, let’s take a look at some fun facts that you may not be aware of regarding the game.

The tradition of Roman numerals associated with Super Bowl V, played on Jan. 17, 1971. Lamar Hunt, former owner of the Kansas City Chiefs, came up with the idea to avoid confusion – given that the date/year of the Super Bowl is played after the regular season. So Super Bowl V was the championship of the 1970 regular season, but played in the 1971 calendar year.

This year’s version – Super Bowl LVI – is played in the 2022 calendar year but the culmination of the 2021 season.

Teams not appearing in a Super Bowl

There are 32 teams in the National Football League, but only four have not appeared in a Super Bowl.

The Detroit Lions joined the NFL in 1930 and is the oldest franchise not to have made an appearance. The other three are the Cleveland Browns, Jacksonville Jaguars and the Houston Texans.

Which teams have not won a Super Bowl

There are 12 teams that have yet to take home the Lombardi Trophy, the signature trophy given to the winner of the annual Super Bowl. Those teams are – Arizona, Atlanta, Buffalo, Carolina, Cincinnati, Cleveland, Detroit, Houston, Jacksonville, Los Angeles Chargers, Minnesota and Tennessee.

Three players that played high school football in Coweta County have played in a Super Bowl, much like former Northgate High pitcher Will Smith did this past fall in the World Series with the Atlanta Braves.

Drew Hill, a former Newnan High star, caught one pass for 28 yards in Super Bowl XIV on Jan. 20, 1980 for the Los Angeles Rams as a wide receiver in his only appearance.

Keith Brooking, a former East Coweta standout, was a rookie linebacker with the Atlanta Falcons in 1998. The Falcons played the Denver Broncos in Super Bowl XXXIII on Jan. 31, 1999. Brooking did not record any tackles in that game.

And another former East Coweta player, punter Chris Hanson, punted 4 times for a 43.8 average with a long of 49 yards in Super Bowl XLII, Feb. 3, 2008, with the New England Patriots.

This and that from wallethub.com.

• Some 52 percent of Americans think Super Bowl Monday should be a national holiday. Why? Because 17.5 million people will miss work the day after a Super Bowl.

• 1.4 billion chicken wings will be eaten on Super Bowl Sunday.

• The average number of calories consumed at a Super Bowl party is 10,821.

Other Notes and Stuff

• Congrats to David Dallas (QB) of Trinity Christian for being named the Offensive Player of the Year in GHSA Class A Private by the Atlanta Journal-Constitution. Kenny Dallas was named Coach of the Year. Other 1st team All-State selections from Trinity Christian included, Dominick Cosper (RB), Josh Dallas (WR), Christian Hanson (LB) and Aaron Gates (DB). The Heritage School had a couple of first team selections – Wyatt Anderson (OL) and punter Mack Mikko.

• The two marquee franchises in Atlanta – the Braves and the Falcons – could have different players next year as the “face” of each team. Braves All-Star first baseman Freddie Freeman has yet to sign with the club and is a free agent. Of course, the Major League Baseball lockout has delayed that transaction. And veteran quarterback Matt Ryan could be shipped away to help the Falcons navigate their terrible salary cap situation in 2022.

• Speaking of the World Champion Braves, if the MLB lockout ends and the 2022 season begins as planned, Atlanta opens the year on the road at Miami on March 31 with four games against the Marlins. Next, the Braves travel to New York to face the Mets on April 4 and 5, then return for their home opener against the Cincinnati Reds on Thursday, April 7. It’s the start of a seven-game homestead as Atlanta hosts the Reds for four games (April 7-10) and the Washington Nationals for three (April 11-13).

• The Southeastern Conference leads all other conferences and independents with 20 appearances in the National Championship Football Game in the BCS and College Football Playoff era began with the 1998 regular season. The next closest is 8 by the ACC. The SEC teams to make it are Alabama, LSU, Florida, Auburn, Georgia and Tennessee.

• “Transfer Portal.” That’s the future of big-time college football or as Ole Miss’ Lane Kiffin calls it “Free Agency of college football.” According to Ross Dellenger of Sports Illustrated, a record 3,000 NCAA football players entered the portal in the last two months. And with about 11,000 scholarship players in Division I, that’s almost 30 percent looking to transfer.