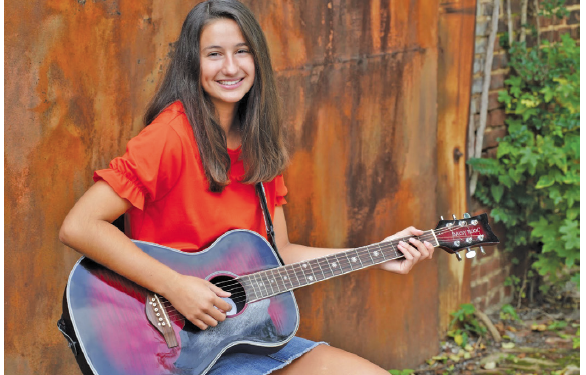 Currently the song remains the same on the music scene as far as events and local venues. Always check ahead to see if your venue has music and of course any changes in their hours of operation during this time.

There’s a lot going on on-line so support musicians by watching, commenting and tipping. I have really enjoyed the shows streaming on social media. Check out the Cellar and The Brickhouse, they have a really good line-up for February!

Thank you for reading The PAPER and supporting your local independent community businesses.

We like to feature local artists and this month it’s Stella Weaver!

Stella (pictured above) started taking guitar lessons at Musicology in Newnan when she was just 6 years old. She also began voice lessons at an early age of 9.

One of her first live performances was at Leaf and Bean at age 9.

At age 12 she wrote a jingle for Nissan of Newnan and performed it live on 92.5 The Bear. She regularly performs at the Tucked Away Music Day festival here in Newnan.

Stella’s set list doesn’t look like what you would expect from a 15-year-old. It includes classic rock, alternative and country genres. Her Dad has always inspired her love of the 70s, 80s, and 90s music.

Besides singing favorite cover tunes, she is always working on the art of songwriting. She believes in finding what you love and working hard to perfect it and we believe she will meet all of her music goals!

If you want to catch one of Stella’s shows check in at The Mad Mexican – Next performance is March 6th at 6 p.m.

THE CELLAR / THE BAYS

No music planned this month, bands play outside and it is Cold!

DOUG KEES … live videos on Because Kindness is Contagious – Facebook

Check out the album Roots & Boughs (acoustic guitar instrumentals) on his website – dougkees.com.

His newest album “I Win” was written in the Spring of 2020 during lockdown. The Associated Press says “I Win is a quarantine accomplishment, craft & care are reflected in the way he packs clever rhymes and wordplay into concise tunes.”

Check out I Win #2 in the Bluegrass Today charts.

HeyDreamer is recording their second album at Real2Reel Studio in Jonesboro. Will Turpin from Collective Soul is producing the album and the band loves every one of these new songs!

You can hear all genres in their playlists: One of my favorites is SAGEBRUSH BOOGIE hosted by Dave Chamberlain. Others include Good Morning Blues,The Jazz Forum,  Global Drumbeat, and Bluegrass.