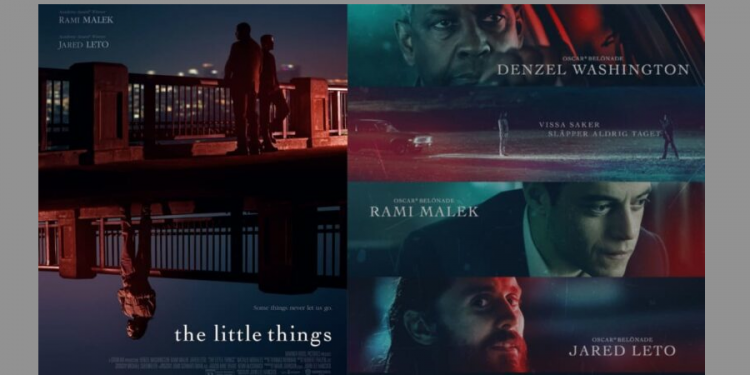 By Jonathan W. Hickman, Special to The Paper

The Little Things – (Streaming on HBO Max and limited theatrical), Fix Rating 7/10:  Despite being “dumped” in January, “The Little Things” is a decent serial killer thriller.  This 1990s set, well-made crime procedural has the unlikely pairing of Oscar-winning actors Denzel Washington and Rami Malek.  They play two police officers attempting to locate a killer after a series of lurid murders.

Washington plays Joe “Deke” Deacon, a semi-retired former detective who now holds a deputy position in a rural community.  When he returns to the big city to retrieve evidence on another case, he’s drawn into a new murder investigation headed by hot-shot, rising star Jim Baxter (Malek).  Their focus lands on the weird Albert Sparma, played by another Oscar winner, Jared Leto.

Washington and Leto both adopt potbellies for their roles.  While Leto looks awful in a pear shape, the extra pounds suit Washington’s 66-year-old, mature persona.  Malek is pensive almost to excess, but there’s enough chemistry with Washington to keep folks interested.  What ultimately works about the movie are the characterizations and creepy atmosphere combined with a somewhat unexpected concluding twist.

To All the Boys: Always and Forever (February 12): This is the third film tracking the on-going adventures of lovesick teen Lara Jean Covey (Lana Condor).  As high school draws to a close, Lara Jean and Peter (Noah Centineo) look to the future of their romance.  But a pair of trips to South Korea and New York City might alter that trajectory.  This one might be setting up the inevitable fourth film involving post-secondary educational goals.

The Repair Shop (streaming now), Fix Rating 8/10: With well over 100 episodes available, this British import will likely charm everyone, particularly those “The Great British Baking Show” fans. Ever wonder what’s meant by “witness marks” on the inner workings of an old clock? Have you ever thought about what it takes to repair an antique piece of furniture? Need some advice on how to use epoxy? Well, in “The Repair Shop,” viewers get an inside look at some of the country’s most talented restoration experts as they repair items brought to them by John Q. Public.  And along the way, we not only learn about the skill and craft involved, but we hear the stories associated with the pieces as well.

Servant Season 2 (Steaming every Friday through March), Fix Rating 7/10: M. Night Shyamalan’s engaging dramatic thriller proved to be one of Apple TV+’s biggest surprises.  The story largely takes place in a single Philadelphia brownstone. Season two picks up right where season one left off, as Dorothy and Sean Turner (Lauren Ambrose and Toby Kebbell) attempt to come to grips with the loss of their child and the mysterious “adoption” of another. The cast is great with “Harry Potter” alum Rupert Grint playing Dorothy’s boozing and hopelessly befuddled younger brother.

Bliss (streaming February 4), Fix Rating 6/10: Writer/director Mike Cahill is interested in telling emotional and dramatic futuristic stories.  His 2011 film “Another Earth,” a collaborative effort with writer/actress Brit Marling, is a high-point in his science fiction work to date.  “Bliss,” a film that captures his indie-film sensibilities, isn’t nearly as emotionally engaging as previous efforts, but it adopts the kind of near-future extended metaphor that does have a purpose and concludes profoundly.

In “Bliss,” Owen Wilson plays Greg, a recently divorced father of two, whose mental health and addiction issues are beginning to weigh him down.  When he loses his job, he meets the charismatic Isabel (Salma Hayek) in a nearby bar.  Soon, the two become partners in a bizarre drug-induced romance that might lead them to a parallel universe.

While Cahill’s narrative pushes the envelope and performances are entertaining, “Bliss” is an often purposely ugly looking and muddled film that frustrates viewers with the unreliable narrator conceit.

Minari (Theatrical February 12), Fix Rating 9/10: Sure to be an Oscar favorite, writer/director Lee Isaac Chung’s “Minari” is an impactful and frank depiction of a Korean family starting a farm in rural Arkansas in the 1980s.

Steven Yeun is Jacob, the family patriarch, who moves his family to a country community where they buy a plot of land and a trailer.  He plans to grow Korean vegetables and sell them to restaurants and Asian grocery stores. It’s a project with potential, but his wife, Monica (Han Ye-ri), isn’t too keen on the idea.

When Monica’s mother, Soon-ja (Youn Yuh-jung), comes to live with them, she shares a room with her grandson, David (Alan Kim), who isn’t happy about it.  And the mother-in-law’s presence doesn’t help the growing tensions between Jacob and Monica.

So much about “Minari” is perfect—the setting, the performances, the space to breathe as the narrative unfolds.  It’s an authentic portrait. And if you want to see another great film about the Asian American experience, check out “Driveways” streaming on various platforms.

The Father (February 26) Fix Rating 9/10: While “The Father” will be touted mainly for Anthony Hopkins’ fantastic performance, this complexly structured film is to be lauded all around.  Directed and co-written by French novelist and playwright Florian Zeller, the movie takes place predominantly in one apartment.  Its set-bound location doesn’t take away from the cinematic qualities.

Hopkins plays Anthony, an older man suffering from a form of dementia.  While his diagnosis isn’t specified, Alzheimer’s is undoubtedly the topic explored here.  Anthony’s daughter, Anne (Olivia Colman), is determined to keep her father at home and struggles to find someone capable of dealing with his peculiarities.  In addition to forgetting things, Anthony sees things too, and his memories and visions often betray him.

“The Father” isn’t a happy film, but I was captivated.  Hopkins and Colman are terrific, and a scene at the end of the film reminds us why he’s one of the greatest actors of all time.

The Mauritanian (February 19), Fix Rating 8/10: After watching “The Mauritanian,” I Googled Mauritania to discover that it’s a country on the Atlantic coast of Africa.  This film tells the story of a man from Mauritania named Mohamedou Ould Slahi (played by Tahar Rahim).  Due to his alleged connections with Osama Bin Laden, he’s taken into custody after the 9/11 attacks.  He stayed in custody, including in Guantanamo Bay, for some 14 years, having never been charged with a crime.

Director Kevin Macdonald (see “The Last King of Scotland”) explores the efforts of attorney Nancy Hollander (an excellent Jodie Foster) to give Mohamedou, aka The Mauritanian, due process.  Whether he was ever a part of the 9/11 attack planning is doubtful, but the evidence collected was so tainted that any fair prosecution proved impossible.

A handsome production with winning performances, chiefly by Foster and Rahim, “The Mauritanian” isn’t a stirring courtroom drama. Still, it’s an interesting and moving examination of missteps made in the aftermath of our nation’s terror tragedy. Supporting performances include Benedict Cumberbatch, as a Marine prosecutor, and Shailene Woodley as a young attorney.