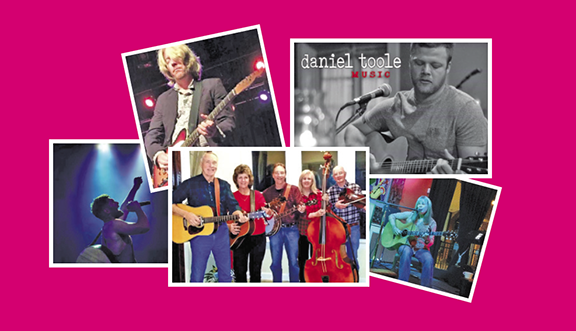 We had Spring of Deception for two days and I’ll take it! Just made me think about the wonderful Spring days we’re due for & the outdoor concerts being planned in the area.

I’ve recently retired (or ‘redirected’ I should say) and then on February 6th married my favorite steel guitar player Mr. Warren Hall, you know him as Barefoot Slim. I included this side note because not only do I consider our fabulous band as family, our new album will include contributions from friends and family members.

Keep your ears open for great music online and in venues where possible. We’ll all be out and about before you know it.

THE CELLAR / THE BAYS

Concerts will resume on April 3.

PICKIN’ ON THE SQUARE

Around the Courthouse Square in downtown Newnan

March 6 … On the 1st Saturday of every month. This event starts around 10 a.m. and goes until 2 p.m. and is for all ages and levels of play. Join in the fun by singing along or bring your acoustic instrument. Lots of networking for musicians going on during the performances.

No music planned this month, bands play outside and it is Cold!

DOUG KEES … live videos on Because Kindness is Contagious – Facebook

Check out the album Roots & Boughs (acoustic guitar instrumentals) on his website – dougkees.com.

His newest album “I Win” was written in the Spring of 2020 during lockdown. The Associated Press says “I Win is a quarantine accomplishment, craft & care are reflected in the way he packs clever rhymes and wordplay into concise tunes.”

Check out I Win #2 in the Bluegrass Today charts.

HeyDreamer is recording their second album at Real2Reel Studio in Jonesboro. Will Turpin from Collective Soul is producing the album and the band loves every one of these new songs! Big announcement for the band is that they will be playing the Mello Festival in the UK in May this year.

JEANINE DUKE … is well known in Newnan for playing the music we love to sing along to. Jeanine says she loves being with people and music is one of the paths that leads to developing friends & fans. Family is very important to her, and it was her older brother who introduced her to music. He left his Kay guitar with her when he returned to the Navy & Jeanine was mesmerized. James Taylor, Carole King & other folk artists from that era, influenced her songwriting early on.

All Virtual Learning For Coweta Students on ...