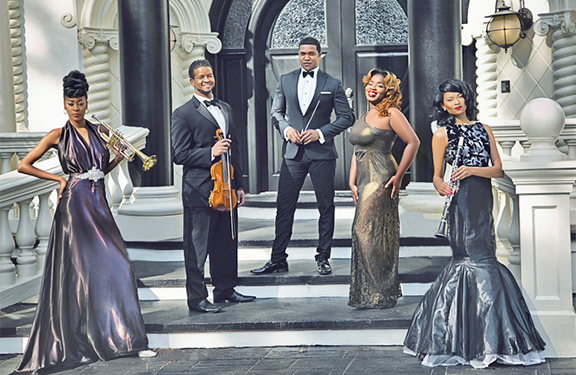 Pictured above is Maestro Jason Ikeem Rogers (center) with members of Orchestra Noir.

The event will be hosted by the Newnan Cultural Arts Commission (NCAC) and spotlights Orchestra Noir’s chamber ensemble of 14 African-American musicians under the direction of founder Maestro Jason Ikeem Rodgers. The performance will feature innovative & electrifying orchestral versions of hits from Black American musical pioneers from the sixties to present.

The performance is set for 7:30 p.m. at the Wadsworth Auditorium in downtown Newnan. Tickets are $50 for adults and $10 for students and can be purchased online at Eventbrite & NCAC:  https://linktr.ee/newnancac.

“I am so excited to bring the ‘Legends’ concert to Newnan on October 14th,” said Maestro JasonIkeem Rodgers. “This concert will be a celebration of R&B’s black music icons who have not only indelibly impacted American culture, but the world.”

Founded in 2016 to celebrate the cultural achievements of African American musical pioneers of all genres, Orchestra Noir has experienced a meteoric rise in fame. The ensemble has performed on the Tonight Show and collaborated with hip-hop and R&B acts like Cardi B., Migos, Clifford “T.I.” Harris, and has a late 2022 show with Rick Ross at Atlanta Symphony Hall.

The Newnan Wadsworth Auditorium will be an intimate setting to experience Orchestra Noir. Coming off of Sold-Out shows in Atlanta, Charleston, Charlotte, Raleigh & Birmingham, NCAC strongly recommends buying tickets in advance. In the event tickets remain, they will be sold at the door on the day of the show.

“I am thrilled we have the opportunity to host Orchestra Noir in Newnan,” says NCAC Chair Dr. Jaami Rutledge. “When I first discovered them online two years ago, I was struck by the ‘get out of your seat’ energy and orchestral elegance they brought to the Motown, R&B, and hip-hop music I grew up singing and dancing to. They are a one-of-a-kind live experience.”

The Wadsworth Auditorium is located at 25 Jefferson Street, two blocks north of the downtown square.