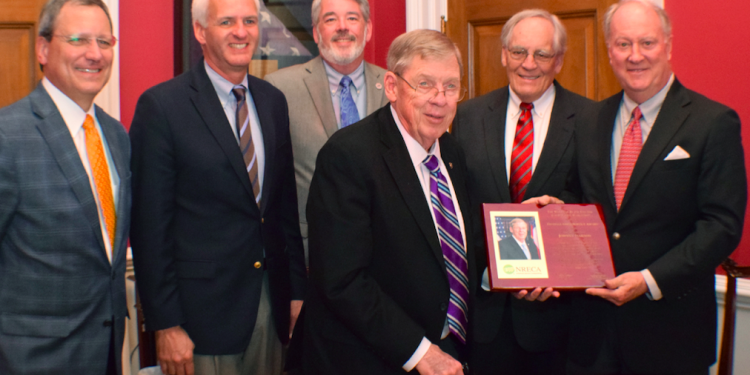 Coweta-Fayette EMC management and board joined with EMCs from across the country in presenting Sen. Johnny Isakson, R-GA, the Distinguished Service Award from the National Rural Electric Cooperative Association (NRECA) during its annual Legislative Conference in Washington, D.C.

The NRECA gives its Distinguished Service Award to public officials who have gone above and beyond in furthering the principles and progress of electric cooperatives and helping the Association advance its goals.

“The Legislative Conference provides a rare opportunity for co-op leaders to gather in one place, at one time, with one voice, to personally engage with lawmakers at the national level and discuss important issues and concerns facing our communities back home,” said CEO Chris Stephens with Coweta-Fayette EMC. “It’s important we build relationships with our elected officials and their staffs so that when an issue arises that is important to our members and employees, we have a contact to express our concerns and let them know how they could affect our ability to provide safe, reliable and affordable electricity and related services to our members. There is no better public servant who will respond to our call than Senator Johnny Isakson.”

“As a member of Cobb EMC, Johnny understands electric cooperatives and our cooperative principles. His unwavering support not only benefits EMCs here in Georgia, but those across the country,” Stephens said. “One of the most recent efforts Johnny supported and championed was Nuclear Production Tax Credits. This legislation included the ability for non-profit utility participants – like CFEMC – to take advantage of the credits. This will save electric co-ops who participate in the construction of nuclear energy millions of dollars, paving the way for clean, carbon-free base load energy.”

“There is no senator with a stronger commitment to our industry than Sen. Isakson,” CFEMC Board Chairman Jim Fulton said. “With the myriad of legislative initiatives which cross a senator’s desk and need a champion, you have to have a respected public servant with the stature of Sen. Isakson to get the attention not only of his Senate peers, but of his House colleagues as well. He has, for his entire career both in the Georgia legislature, in the U.S. House and now in the U.S. Senate, been that marshal for our causes.”

“While I served in the legislature, Johnny was elected as leader of our caucus,” Shepard said. “He gave us direction. When we had tough issues, you’d never go wrong watching Isakson and seeing how he handled issues. He never shied away from the big issues and always championed the cause of what was in the best interest of the state – no matter how tough that might be. In the 80’s, we had the issue of Vogtle Units 1 and 2. There were serious discussions on how we needed to phase in rates, handle cost overruns – all these similar to the issues we face at Vogtle today. Johnny took that bill and worked tirelessly on both sides of the aisle to get the votes needed to get it passed.”

Isakson’s ability to unify people has left a lasting mark.

“What I remember most about Johnny is the way he’s able to pull people together,” Shepard said. “He’s always gone to people and said ‘I know what we disagree on, but what can we agree on?’ It’s that gift that makes him a true diplomat and statesman. I’ve always said if we had more people in Washington like him, I wouldn’t worry about our country.”

According to Shepard, there’s none more deserving of this award.

“Johnny has been supportive of EMCs and our issues as long as I can remember,” Shepard said. “He’s worked with us in the early days on issues like satellite, accountability, and always had a great relationship with Georgia EMC. In the last few years, he’s worked on broadband and nuclear production tax credits. He’s a great friend to us personally and to us as an industry.”

CFEMC is a member owned cooperative providing electricity and related services to over 70,000 members in Coweta, Fayette, Clayton, Heard, Fulton, Meriwether, Spalding and Troup counties. To learn more, visit www.utility.org or follow us on Facebook and Twitter.

The Music: Live and Local May Calendar

Norman Winter to speak at next May ...