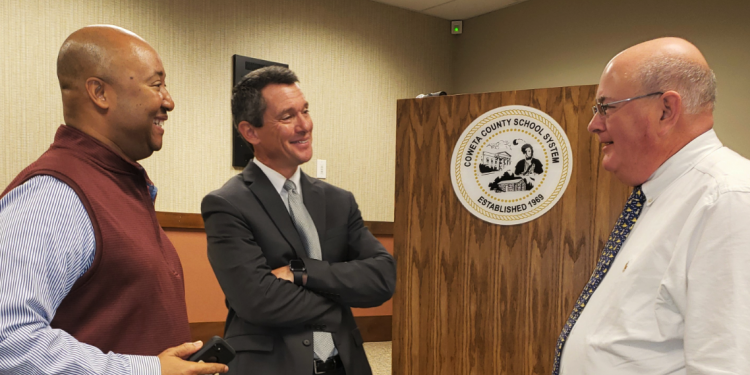 Coweta County Superintendent of School Dr. Steve Barker announced Wednesday that he will retire at the end of the school year, following 30 years of service to the Coweta County School System.

Barker made the announcement to Coweta County principals and staff Wednesday morning, and in an email to school system employees. He will continue to serve as Superintendent until June 30, 2020.

“I consider it a privilege to serve the students, families and business leaders throughout our community.  Above all, it is an honor to work with each of you, the dedicated faculty and staff members of the Coweta County School System,” said Barker.

Dr. Barker has served as a teacher, assistant principal and principal at Coweta County elementary, middle and high schools, and Director of Administrative Services before being named Superintendent in 2011.  He began with the school system in 1990 as teacher and coach at Evans Middle School, Northgate Middle School, and then Northgate High school.  He was named Assistant Principal of Northgate High in 1998, Principal of Canongate Elementary School in 1999, and Principal of Smokey Road Middle School in 2001. Dr. Barker served as Principal of Newnan High School from 2003 to 2007, and then Director of Administrative Services for the school system from 2007 to 2011.

Barker earned his B.A. in Education with an emphasis on Social Studies from Shorter College, his Master’s from the State University of West Georgia, and his Doctorate in Educational Leadership from Nova Southeastern University. He is a native of Dalton, Georgia, and a 1986 graduate of Northwest Whitfield High School.  He is married to Karen Barker, who is Curriculum Director for the Coweta County School System.  The couple has two children – Cade and Lily Glen.