The Film Fix: Big-Screen Reviews for Shazam!, Pet Sematary, others 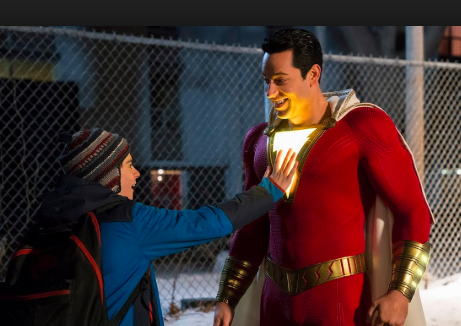 Below are reviews of several big-screen options you’ll have during the month of April as well as release-dates of other films.

“Shazam!” is goofy but good.

Down on his luck and grasping for purpose, Billy Batson (Asher Angel) is magically abducted and spirited away to a mysterious cave inhabited by an old wizard (Djimon Hounsou). Without much choice, the boy is given the powers of the wizard, and this turns him into the superhero eventually known as Shazam. As hokey as all that may sound, a little self-aware humor makes it work. And this is especially true, when Billy, transformed into a tight and cape wearing 30-something year old man (played by Zachary Levi), still possesses the mind of a 14-year-old.

A joke-a-minute, “Shazam!” succeeds despite its ridiculous premise. There’s the standard complement of smashy, bangy non-sense in which an untold number of windows are broken and buildings are damaged. But the actual violence and destruction are toned down. Therefore, no buildings crumble and, at all times, there’s an attempt to minimize the body count. The weight here is the humor and the good-natured story of finding family in the most unlikely of places.

Amiable and, often, silly in a good way, “Shazam!” manages to one-up the overly long and bonkers “Aquaman.” And by exposing the lighter, goofier side of this non-Marvel comic cinematic universe, Warner Bros. and DC Entertainment seem to have finally found their footing.

This second adaptation of the dark Stephen King novel disappoints.

If you don’t know, the “Pet Sematary” story is about the Creed family, who leave the bustling city for the country life in, of course, Maine. We meet Louis (Jason Clarke), a doctor, who left a busy ER in favor of a college clinic. His wife, Rachel (Amy Seimetz), is happy to be in a new place, where she might be able to overcome the demons of her childhood. The Creeds have two children, the nine-year-old Ellie (Jeté Laurence) and the toddler-aged Gage (played by a tag team of Hugo and Lucas Lavoie). They bring with them their beloved family cat, which will play a key, creepy role in how things unfold.

Once the Creeds settle into their rural home, which is a barn-like cabin on some 50 acres of land, they meet the neighbor, Jud (John Lithgow). And they are introduced to a strange ritual that takes place, apparently with regularity, on their land. One wonders who their real estate agent was, and why in the world they hadn’t visited the property prior to moving into it? Could it be that the home was purchased online like buying a used car from Carvana?

In time, things unravel for the Creeds. The graveyard, bearing the odd misspelled sign “Pet Sematary,” is only a front for something much more sinister. And the theme of how evil works its way into you is thrust on viewers with bludgeoning force. It’s all a very obvious handling of the King material, with lots of bumps and jump scares together with the regulation amount of gore. Anyone who braved the 1989 film, directed so well by Mary Lambert, will be underwhelmed. There’s nothing new here that is worth revisiting.

Sincere and well-acted, “Giant Little Ones” travels down the rough road of modern intolerance.

After swim team practice, a group of high school boys clown around in the locker room. One boy accuses another of being a homosexual. A slur is uttered, and the two athletic young men square up, preparing to fight. Another boy, Ballas (Darren Mann), steps between them and things cool down.

Teammates, Franky (Josh Wiggins) and Ballas, have been best friends since they were little guys. Although Franky was not the boy accused of being gay, he’s affected by the conflict. Franky’s proud of Ballas’ quick thinking. The two boys share everything with one another. And after sneaking out of his house with his girlfriend, Ballas brags to Frankly about his sexual conquest, claiming to have “done it six times” in one day. Sex and male bravado is floating all around them, but Franky is a virgin, and he’s uncomfortable when talking about “going all the way.”

The fact that the boy in the locker room doesn’t deny that he is homosexual is eye-opening. In today’s modern climate, maybe this isn’t surprising, but regardless of how far we’ve progressed, old prejudices die hard. A small, genuine film, “Giant Little Ones” reminds us that hate, built out of fear, lingers long.

“Hotel Mumbai” is an exacting and horrific, matter-of-fact telling of the 2008 Mumbai terror attacks.

The luxury and comfort of the The Taj Mahal Palace Hotel in Mumbai, India, was horrifically disrupted in November of 2008, when terrorists from neighboring Pakistan laid siege to the structure. The staff and residents were wholly unprepared for this attack. But through the quick thinking and bravery of hotel staff, lives were saved. “Hotel Mumbai” tracks those events, watched by the rest of the world on 24 hour news.

Much of the action in the film takes place within the five-star hotel. It’s a grueling endurance test of a film, but gives viewers an intimate look at what it was like to live and die within the blood-soaked walls of a place where violence was ordinarily not present. I came away thinking: it could happen here.

Appealing only to the youngest viewers, “Dumbo” will not enchant the rest of us.

For those of us who grew up fondly remembering “Dumbo” and shedding tears, take heart, this new movie won’t tarnish those memories. Unfortunately, it won’t create new ones either. Burton’s bland handling of the material marks a new low for the director, who has always managed to bring a sense of wonder to anything he touches. Sadly, “Dumbo (2019)” is not magical.

When Holt Farrier (Colin Farrell) returns home from World War I, he’s greeted by his two children, Milly (Nico Parker) and Joe (Finley Hobbins). His wife has passed away, and Holt, a one-time horse-riding circus star, has lost his arm in battle.

The Farriers live with a traveling circus, which has fallen on hard times. Its owner, Max Medici (Danny DeVito), has to find a new act to save the business.

Gambling on animal acts, Max purchases a pregnant elephant. His hope is that a baby might be an attraction. But when the baby is born (later dubbed Dumbo), it’s deformed, or, at least, Max thinks so. The baby’s ears are abnormally large. How can he market this strange beast?

Everything about the setup is suspect. Like most of Burton’s work, the world is inhabited by the characters from a fantastical, wondrous parallel universe. It’s best to just go with the fantasy aspects of the environment, which introduce us to Dumbo’s flying talents earlier on. But giving into the fantasy can only go so far.

“Dumbo (2019)” adopts an unsophisticated narrative that fails to promote the important, self-reliant moral that made the 1941 animated adaptation a classic.

April 12 – Hellboy
The news here is that this is not likely to screen for critics. Usually, this means the movie has been determined by the distributor to be a turkey. Given the history of the Hellboy character, let’s hope that fear is misplaced. This time around, director Neil Marshall (“The Descent”) takes over from Guillermo del Toro (who directed well-regarded “Hellboy” films in 2004 and 2008), and judging from the trailers and clips, this reboot should be pretty cool. Sporting an “R” rating, expect the violence to be heavy and the jokes to be appropriately vulgar. Stepping into the title character is “Stranger Things” star David Harbour. And Hellboy is guided by Professor Bruttenholm (Ian McShane). The villain is Nimue the Blood Queen played by Milla Jovoich.

April 26 – Avengers: Endgame
For those of you who were disappointed by the bland “Captain Marvel,” the “Avengers” final act should bring viewers back into the fold. Of course, “Captain Marvel” was successful in terms of box office, and it charmed most critics, including this one, who still had to complain about how overly cutesy it was. All in all, the movie wasn’t an epic home run. And given the success of DC’s “Shazam!,” it’s going to be interesting how the two universes compete moving forward after arguably the final “Avengers” movie is released. Marvel’s path forward is uncertain.

“Endgame” promises to be a culmination of all things Marvel Cinematic Universe. The movie picks up after the devastation that ended 2018’s “Infinity War.” The remaining heroes, that weren’t wiped off the planet by Thanos, will try to undo the damage. The trailers have been somewhat mysterious, but the thrust of it appears to be that there is a way to bring the departed supers back. Of course, to do that, Thanos will have to be dealt with, and with his power, such a thing seems impossible. Let’s face it, all those heroes just can’t stay dead, right? After all, the franchise has to go on. Look for this one to break all kinds of box office records, as it effectively kicks off the summer season.

Play Golf With Your Buds AND Support ...