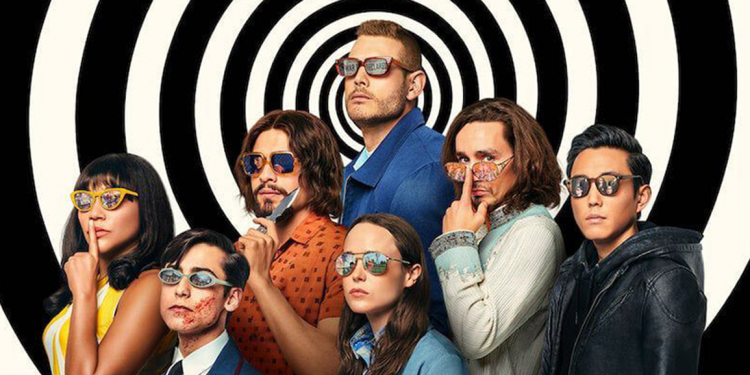 Tesla (August 21) – preview – Ethan Hawke plays frustrated inventor Nikola Tesla and Kyle MacLachlan is Thomas Edison, his arch-rival in this historical tale from director Michael Almereyda (see “The Experimenter” and “Marjorie Prime”). “Tesla” made its premiere at this year’s Sundance Film Festival, where it received mixed reviews. Almereyda is an unusual filmmaker, so viewers can expect an unconventional biopic. The film also includes Jim Gaffigan as George Westinghouse.

Last year, Edison, Westinghouse, and Tesla were featured prominently in the well-made movie “The Current War,” which had a troubled release. In the United States, that movie featured the designation “Director’s Cut” to show the significant changes made since the film’s initial unsuccessful festival and international showings.

While I was a fan of “The Current War: Director’s Cut,” I hope that Almereyda’s approach to the material is more challenging.

What to Binge: The Umbrella Academy (Season Two – July 31) Fix Rating 7/10  (pictured above) – After a rocky, slam-bang conclusion to Netflix’ bewitching season one, the time-tripping, hero kids of The Umbrella Academy find themselves trapped in the 1960s. Each arrives in the past in different years, but Number Five (the charismatic Aidan Gallagher) might hold the keys to bringing them together. Will the team change history? Will they find their way home? In many ways, this season is an improvement, and with the racially-charged time, “The Umbrella Academy” has similar social relevance to HBO’s much-lauded “Watchmen.”

Completist Binge: The Legend of Korra (August 14) – All four seasons of this sequel series to the immensely popular animated series “Avatar: The Last Airbender” will be available on Netflix this month. This steam-punk inspired follow-up is set 70 years after the conclusion of “Airbender.” It’s a must for Avatar fans, but don’t expect it to match its predecessor. Naturally, the story is about the title character Korra, a water-bender on her way to becoming the next Avatar.

What to Binge: The Boys (Season One – Streaming Now) & Prime Rewind: Inside The Boys — Amazon Original Special (August 28) – Last year, Amazon found great success with their adaptation of comic book series “The Boys.” Violent, sexy, and self-aware, that show proved to be unique in the otherwise Marvel dominated genre. To prepare for the upcoming season two, which premieres on Prime on September 4, viewers can stream the entire first series.

To promote and expand on the series, Amazon has launched a chat show called “Prime Rewind: Inside The Boys — Amazon Original Special” hosted by Aisha Tyler. In the same way that AMC used “Talking Dead,” this interview series will allow cast and creators to offer insight into the world of “The Boys.”

Film Fix Extra: Inception and Top Gun (August 1) – Christopher Nolan’s “Tenet” keeps getting postponed, and, as of my deadline, it’s to open on September 3rd, but in the meantime, you can get your Nolan fix with his modern classic “Inception.” And with Tom Cruise’s high-flying sequel to Tony Scott’s 1980s hit “Top Gun” now moved to next year, you’ll have to get your need for speed by watching the original on Prime this month.

Movie to Watch: The Peanut Butter Falcon (August 6) Fix Rating 9/10 – One of last year’s most-rewarding viewing experiences, “Falcon” stars Shia LaBeouf, Dakota Johnson, and newcomer Zack Gottsagen. The story follows a young man with Down Syndrome named Zak (played perfectly with great heart by Gottsagen), who escapes his care home to become a professional wrestler. On his journey, he’s befriended by Tyler (LaBeouf), who’s on the run. A social worker named Eleanor (Johnson) joins them on their quest to meet Zak’s wrestling idol. This one’s a keeper.

Throwback Binge: City Slickers & City Slickers 2: The Legend of Curly’s Gold (August 1) – Let’s get this out of the way: the 1994 sequel to the 1991 hit is a little less than inspired. But the continuing saga of disillusioned 40-somethings is well worth revisiting. The title says it all. Three friends from the big city (Billy Crystal, Daniel Stern, and Bruno Kirby) travel to the southwest to take part in a cattle drive. In the first film, Jack Palance won the Oscar for his memorable turn as a seasoned cowboy named Curly.

Movie to Watch: Ant-Man and the Wasp (August 14) Fix Rating 6/10 – Just when you thought that all the Marvel films were available on the Disney streaming platform, another one pops up. Shot in Georgia and, specifically, in parts of Newnan, “Ant-Man and the Wasp” was reliable, light entertainment. The story of this lesser MCU entry occurred after the events of “Captain America: Civil War” and just before “Avengers: Infinity War.”

Film Fix Extra: X-Men (August 7) – In its continuing effort to be the one-stop for all things Marvel, Disney brings in the original “X-Men” movie, that’s not technically part of the MCU. This 2000 superhero adventure launched the lucrative X-Men franchise that came to a crashing halt with last year’s disappointing “Dark Phoenix.”

Boys State (August 14) – Like Disney+, Apple’s library does struggle to stay fresh. And acquiring material like this Sundance award-winning documentary should give subscribers a reason to keep paying. With a presidential election now months away, “Boys State” seems to be extra relevant. This verite documentary follows a thousand Texas high school seniors who engage is a week-long political event: to build a state government. Tensions mount in the gubernatorial race, as a Reagan-loving conservative named Ben squares off against Steven, an immigration-focused progressive.

In the Cold Dark Night (Streaming now on Hulu) – After its network television premiere on ABC last month, the locally lensed feature documentary “In the Cold Dark Night” is available on Hulu. Set in Griffin, Georgia, the film is a true-crime story of a 1983 racially motivated murder finally solved after reopening the cold case in 2017. The film crew embedded themselves in the investigation and covered the trial and eventual convictions. Told with careful attention to detail and sensitivity to the emotions swirling around the case, directors Nick Hampson and Stephen Robert Morse (see “EuroTrump”) weave an impactful story of tragedy and justice.

Random Acts of Violence (August 21) No Fix 5/10 – Actor turned director Jay Baruchel has some neat ideas for the horror/slasher genre, but “Random Acts of Violence” doesn’t make these ideas scary. The film is an ultra low budget tale of a comic book writer named Todd (Jesse Williams), who specializes in R-rated material. His most successful work is called “Slasherman,” inspired by an uncaught real-life killer.

When Todd, his business partner Ezra (Baruchel), his girlfriend Kathy (Jordana Brewster), and Todd’s assistant Aurora (Niamh Wilson) take off on a road trip, the real Slasherman comes out of retirement to kill again.

The unfocused narrative, co-written by Baruchel, makes the film feel aimless. It doesn’t help that the killer is awkward, clumsy, and unconvincing. The movie lives up to its title because the sporadic, inconsistent, bloody killings are indeed random. It’s this approach that also undercuts our bond with the characters and their ultimate plight.