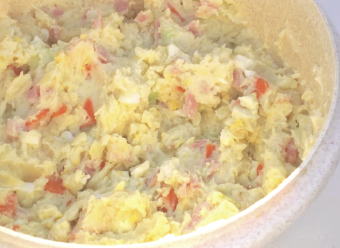 If there’s a more beloved summer side dish than potato salad, I haven’t heard of it. When I’m at an event where burgers and hot dogs are on the grill, I’m always looking for a bowl of potato salad nearby. Baked beans and slaw are nice too, but a good potato salad will always be a summertime favorite.

Today, it’s hard to imagine a time when potatoes weren’t plentiful. According to foodtimeline.org, potatoes were introduced to Europe by Spanish explorers in the sixteenth century, and by the end of the century, many countries were using this “new” vegetable. And when we’re researching the origins of potato salad, food historians say, Germany is a good place to begin our search. The country had lots of potatoes, so Germany was likely among the first to consider cooking potatoes and covering them with some sort of dressing.

Foodtimeline.org also notes that the dressing the Germans used in their warm potato salad contained vinegar, sometimes with coarse mustard or sugar, often adding bacon, and “when potato salad caught on in the United States, in the second half of the 19th century, it was probably by way of German immigrants.”

I believe a good potato salad recipe is like a pound cake recipe in that everyone has their favorite, and I’m always interested in sampling new ones. If you’re interested in trying a new potato salad recipe with a lighter taste than we usually find down South, I’d like to share one I got from my friend Lani, who lives in Honolulu. Lani was a reader of my tea blog years ago, and she and I began corresponding. Soon, she was sending me some fun Hawaiian foods to try. One time, she included a recipe for Japanese Potato Salad. I was surprised when Lani told me that she enjoyed this tasty potato salad as a sandwich filling. While I do like potato salad, I had never considered putting this food between two slices of bread, but I tried it as a tea sandwich and thought it was quite delicious.

The recipe required some guessing as to the exact amounts and varieties of the ingredients used, so here’s the way I made it.

Boil potatoes until skins start to peel off and potatoes are soft. Remove skins and mash the potatoes. While potatoes are still hot, add the rice vinegar, olive oil, and salt. Combine potato mixture, mayonnaise, the other vegetables (including drained onions), ham and chopped eggs. Chill before serving.