The Weekly Kitchen: A new cooking technique from an old recipe box 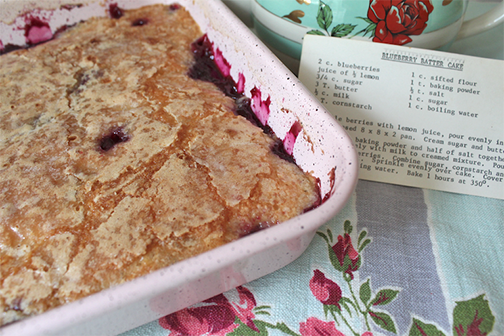 By ANGELA McRAE, Special to The Weekly

I was flipping through some of the vintage recipe boxes I’ve been collecting when I came across this typewritten recipe for Blueberry Batter Cake. What intrigued me was that once the batter is in the pan, you pour a cup of boiling water over it all. Could that possibly work?

While I imagine that this unknown cook of yesteryear probably got the recipe correct when she typed it onto that recipe card, you never know. I googled “boiling water in cake batter” and was surprised to find that people have been seeking and sharing information on this topic for years. Cooks claim a number of benefits from using boiling water in a cake recipe, and the one I saw mentioned repeatedly was that boiling water gives the cake a softer, moister texture.

That made sense. One of my favorite cupcake recipes calls for boiling water, and those cupcakes are easily the best ones I’ve ever made. They’ve been a hit at a wedding, family reunions, and other events, so I’m sold on boiling water in cupcake batter.

In a blueberry cake, though? I gave it a whirl and prayed for success.

My first question was whether three tablespoons of butter was really enough for this recipe. Seemed a little skimpy, but it worked just fine, and I reminded myself that older recipes were sometimes holdovers from war-rationing times, so lesser amounts of certain ingredients shouldn’t be surprising.

What the recipe lacks in butter, it makes up for in sugar. I sprinkled that sugar mixture oh-so-evenly atop my cake batter and then watched it all flooded by boiling water like the tide coming in. Fingers crossed, I popped the pan into the oven.

First, let it be said that the scent of hot, oozing blueberries is an intoxicating one, and the resulting cake was absolutely delicious. I’d assumed it would be cobbler-like, but instead, it reminded me of an airy shortcake with a thin, crispy sugar crust. If you’re in the mood to try a new blueberry dessert, I’m happy to share this one!

Preheat oven to 350 degrees. Sprinkle berries with lemon juice and pour evenly into a well-greased 8 x 8 x 2-inch pan. In a mixing bowl, use an electric mixer to cream 3/4 cup of the sugar and the butter. Sift together the flour, baking powder, and 1/4 teaspoon of the salt. Add alternately with the milk to the creamed mixture and combine well. Spoon batter over the blueberries. Combine remaining 1 cup sugar, cornstarch, and remaining 1/4 teaspoon salt. Sprinkle evenly over cake batter. Last, pour the boiling water over the mixture. Bake 1 hour and serve warm.