The Shopper Kitchen: A Macaroni Salad perfect for Summer 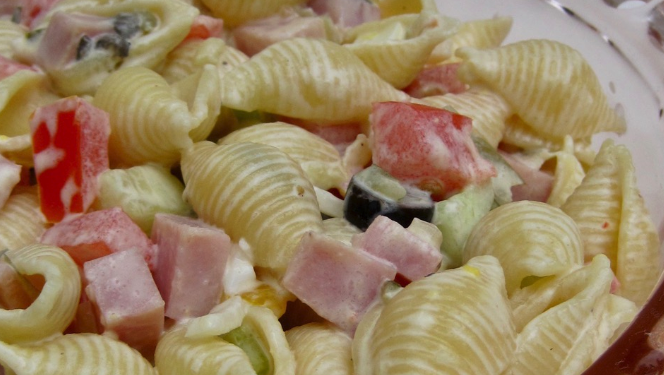 Many years ago, I celebrated a birthday with a girlfriends trip to Warm Springs. We had a great time staying at a local B&B and then shopping our way through town, finally ending up at the Victorian Tea Room for lunch one day.

To my surprise, this wasn’t a tea-and-crumpets type of tea room but rather a place that served hearty entrees and great Southern food.

I have returned to Warm Springs many times over the years to browse its antique stores, and I have also visited to dine with friends at the Bulloch House, the home built in 1893 that became a restaurant about a hundred years later. Then, in June of 2015, many of us scrolled through our Facebook feeds one morning to discover the awful news that the Bulloch House had burned overnight following a lightning strike. The fire was widely covered in local media, and many were left wondering whether a beloved regional restaurant would ever return.

Fortunately, in December of 2015, the Bulloch House reopened, only this time, it had moved to Broad Street, in the building that I first knew as the Victorian Tea Room. I thought the new location was brilliant, and I love its history.

If you keep your eyes open while you’re in Newnan antique stores, you can occasionally find a copy of the 1991 cookbook Victorian Tea Room Favorite Recipes—Warm Springs. One of the book’s recipes I like to make is the Macaroni Salad, which is a crowd pleaser of a dish. I make it for summertime family gatherings, and not long ago, I made it to share when a friend’s father passed away. It feeds a bunch of folks, it’s easy to make, and if you love black olives and Italian dressing as I do, it’s absolutely delicious.

Because it’s almost summertime, I’m looking for seashells at every turn, so instead of using elbow macaroni, I use pasta shells because they’re pretty and summery. And if your summer garden is already producing peppers, by all means, use whatever color and variety of them is available.

The key to a good pasta salad, of course, is to make sure you don’t overcook the pasta. Once it’s reached the desired firmness, run cold water over the pasta to keep it from cooking any further.

Cook pasta according to package directions and drain. Toss with remaining ingredients and chill until serving time. This recipe was originally said to serve six to eight, but ten to twelve is more like it!

Weekend Weather in Coweta: Highs near 90 ...