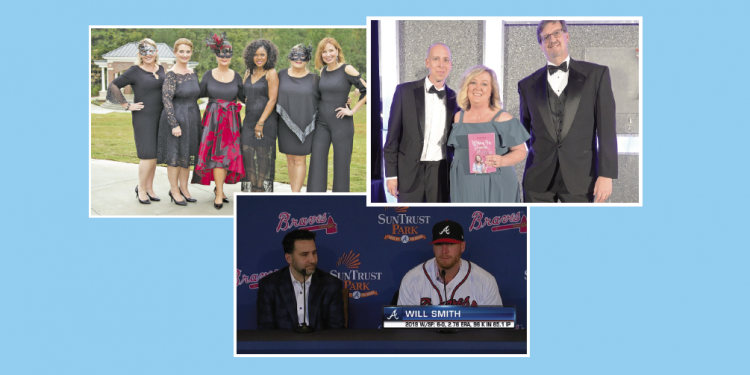 Bags of dog food should come with toys like cereal boxes do.

From Piedmont Newnan Hospital: “Thank you so much for your support of our inaugural event – the Piedmont Newnan Soiree. We are so pleased that we have raised nearly $100,000 to support the Thomas F. Chapman Family Cancer Wellness Center, which offers complimentary support services and programs such as yoga, cooking demonstrations, expressive art classes, massage therapy, stress reduction and exercise to anyone affected by cancer, regardless of whether or not he or she is a Piedmont patient.”

Golf Life Ladies donated $15,000 on Meals on Wheels of Coweta as part of their annual donation to a local nonprofit. Thanks ladies, hit em straight.

There might come a day when items will have a “made on Earth” sticker.

Time for an upgrade. Students in the Coweta County School System just got new Chromebooks for school. That would be 13,000 in total.

From the Newnan Police Department: Battle of the Badge results: 181 pints of blood; 206 registered participants.Newnan PD – 110; Coweta SO – 101. We apologize again to those of you that came out and couldn’t donate due to running out of supplies. We had such a great turnout that our community overwhelmed the predictions of the Red Cross.”

People can get really ticked off at you for obeying this law – the speed limit.

Lots of changes in the local nonprofit scene. Kevin Barbee, who recently resigned as executive director of The Coweta Samaritan Clinic, has taken over as head of ELEVATE Coweta Students. ELEVATE recently changed its name and organization structure, having previously been known as Communities In Schools run by Gina Weathersby. Weathersby is now working at the Newnan Utilities Foundation. And Lou Graner, former executive director of the Samaritan Clinic, has stepped back in to help while that organization’s board looks for a new director. Yes, an explanatory diagram is forthcoming.

Pocahontas and Shakespeare were alive at the same time.

The Vet Connect 5K had another successful run, raising $10,000 for a local veterans relief fund overseen by the Veterans of Foreign Wars Post 2667 and American Legion Post. Since its inception six years ago, about $60,000 has been donated. The Vet Connect was started by Newnan High School teachers Steve Quesinberry and Frank Henderson, both history teachers.

Arden’s Garden has opened at 98 Temple Ave. The Atlanta-based family-owned juice company was founded in 1995. It has 13 stores in Atlanta and sells bottled juices in 5 states: Georgia, Florida, Tennessee and both North and South Carolina.

University System of Georgia (USG) Chancellor Steve Wrigley announced he accepted University of West Georgia (UWG) Interim President Micheal Crafton’s resignation effective December 16, the end of the fall semester. Following his resignation as interim president and provost, Crafton will return to faculty in the Spring 2020 semester to teach in the College of Education’s Ed.D. of Higher Education Administration program. Dr. Stuart Rayfield, Vice Chancellor for Leadership and Institutional Development at USG’s System Office, will lead UWG as interim president until a new president is announced. A national presidential search is currently underway.

There is a certain irony to highway billboards that say “don’t drive distracted.”

Backpack Buddies sent out a big “thank you” to sponsors who helped the organization raise $41,000 for their Silent Auction Dinner. “We are beyond blessed for your support in helping feed hungry children each weekend in Coweta County. Thank you, thank you, thank you!!!”

Local author Chellie W. Phillips recently won a 2019 Author Academy Award in the category of Self-Help for her book, “When In Doubt, Delete It!” Phillips received the award at the recent Author Academy Awards ceremony held at the Hilton Columbus/Polaris, in Columbus, Ohio. She is the vice president of director of communications and public relations for Coweta-Fayette EMC.

Piedmont Newnan Hospital held a groundbreaking ceremony on Nov. 7 for a new 113,000-square-foot medical office building (MOB). The new MOB is slated to be complete in late 2020, with occupancy in early 2021, and will be the second MOB on the hospital’s campus. The new, five-level Piedmont Medical Plaza II at 795 Poplar Road will be a critical part of the full-service health campus it will share with the hospital.

Congrats to Will Smith. The former Northgate High pitcher just signed a three-year contract worth $39 million dollars with the Atlanta Braves. The Newnan native made the Major League Baseball National League All-Star team a year ago as a member of the San Francisco Giants. He joins a couple of other former Coweta County standouts now excelling in the professional ranks – football players Alec Ogletree of the N.Y. Giants and Will Lutz of the New Orleans Saints.