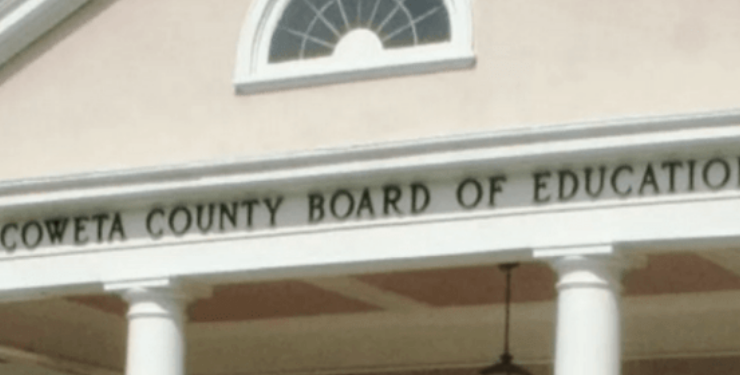 The Coweta County Board of Education discussed a possible redistricting of Northgate High School and East Coweta High Schools, which would take effect starting in 2021-22 school year if approved.

The redistricting was discussed as a means of reducing the student enrollment at East Coweta High School to provide for future growth in that district, while also raising Northgate High School’s enrollment to a level comparable with Newnan High School. If approved in the coming months, the proposed redistricting would follow an upcoming renovation and a possible classroom expansion at Northgate.

The Board of Education took steps on several upcoming projects involving Northgate High School at its meeting on Tuesday, September 10:

• The Board approved an Intergovernmental Agreement between Coweta County Water and Sewerage Authority and the Coweta County School System for the construction of a sewer line extension to serve Northgate High School, Shaw Road Middle School and Canongate Elementary School.

That sewer line will eliminate the need for a septic field at Northgate, and would allow for additional building space in the front of the school’s Fischer Road campus.

•  The Board also approved a new “Fiscal Year 2021 State Capital Outlay Projects Application” for state funding for several projects, including Middle School Gymnasium HVAC modifications, a White Oak Elementary School roofing project, and $4,499,397 for state funding that the system has earned toward high school classroom expansion.  Those funds would be applied to classroom additions at Northgate High School during the upcoming renovation project. State funding would be joined by Coweta County ESPLOST funds to finance the project.

Northgate’s proposed renovation follows similar renovations at the Newnan High School and East Coweta High School campuses in recent years, which also netted an increase in classroom space at those schools. The proposed Northgate classroom expansion, if approved, could be built on that space and would add a new wing to Northgate which would include a new and larger band room, larger chorus room and larger drama room, 2 new art rooms, 2 science labs, and 4 additional general classrooms.

Renovations of Northgate’s campus would also be expected to net an additional three classrooms overall. The addition of 14 classrooms at Northgate would make the school’s overall capacity similar to Newnan High School’s current capacity.

Dr. Barker and school board members discussed a proposal to shift some areas south of highway 34 and now in the East Coweta High School district into Northgate High’s district, with a goal of increasing Northgate’s enrollment by 400 to 450 students, and decreasing East Coweta’s enrollment by that amount.

A specific redistricting map for such a move has not been considered yet, and the Superintendent indicated that he would seek parent feedback before proposing a map to the board for approval. The proposed redistricting move would not affect Newnan High School’s district boundaries.

If approved by the board, the redistricting would not take effect until the completion of Northgate’s campus renovation and classroom addition, which would be expected by the 2021-22 school year (August, 2021). Superintendent Steve Barker said that the redistricting, if approved, should also allow for “grandfathering” of students enrolled at that time at East Coweta (rising 10th through 12 graders in the 2021-22 school year), if they wished to stay at EC and if they provided their own transportation to and from school.

The numbers above show current enrollment and the “average on campus,” which is the average number of students actually in the campus classrooms during the school day, and which does not include students who are off campus in dual-enrollment, work-based learning or other non-traditional educational opportunities.  The building-rated capacity, Barker noted, is a rough estimate based on state calculation related to the classrooms on each campus, and tends to be lower than the actual practical capacity of each school, but does reflect the relative sizes of the three high schools.

Barker noted that an increase in Northgate’s classroom capacity would allow for a redistricting of areas south of highway 34 to Northgate, which would reduce enrollment at East Coweta and would allow room for future growth at both schools. The area considered would be limited to areas south of highway 34 and north of Lower Fayetteville Road, though not all areas within that region would be affected. The area currently contains approximately 800 high school students currently, and the proposal would redistrict roughly half of that number.

Barker said that school system growth overall, and high school enrollment growth, has been slow but steady in recent years.

“With enrollment increasing at less than 100 students per year for the past three years on average, we continue to monitor enrollment trends and track growth,” said Barker.  “Our high school enrollment growth has been concentrated in the East Coweta attendance zone.”

“By adding potential classrooms (and) fine arts rooms to Northgate, we could redistrict some students who live between Lower Fayetteville and highway 34 to Northgate from East Coweta. This would bring East Coweta’s enrollment to within its original capacity and populate Northgate comparable to the other two schools,” he said.

“With the increase of students taking dual enrollment or taking courses at CEC, our buildings would actually be under capacity throughout the day,” which would allow for continued enrollment growth in the coming years, said Barker.

Northgate High School’s renovation project and the redistricting proposal, if approved, would also parallel the current construction of Coweta County’s 7th middle school on Shaw Road in northeastern Coweta.  Construction on the county’s newest middle school began in August, and is also anticipated for completion for the 2021-22 school year. 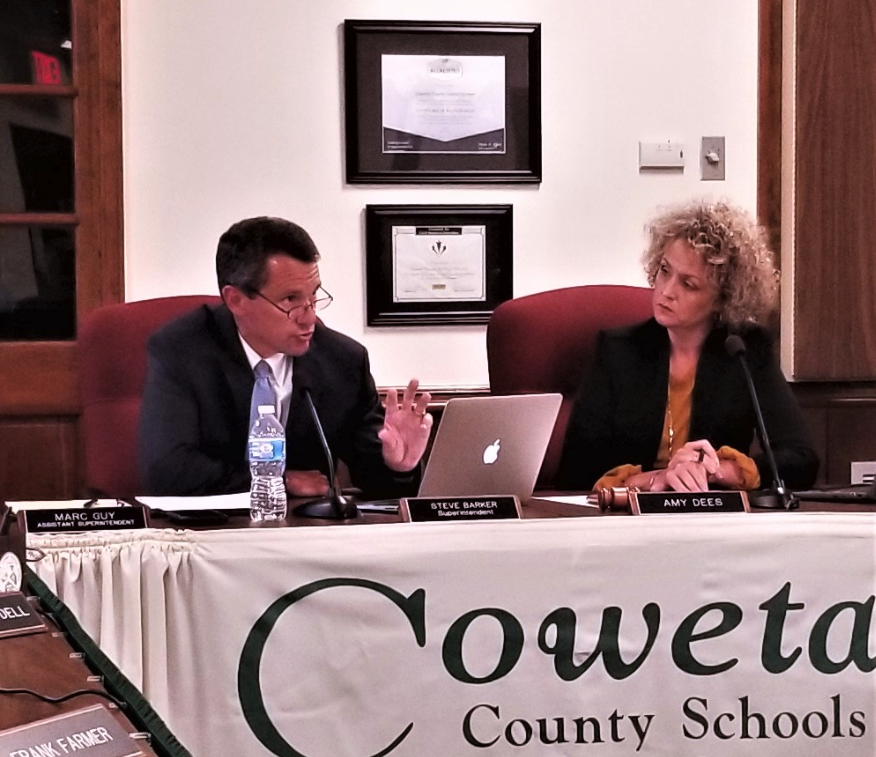 Pictured above is Superintendent Steve Barker, left, and Board Chairman Amy Dees, right, at Tuesday’s meeting.