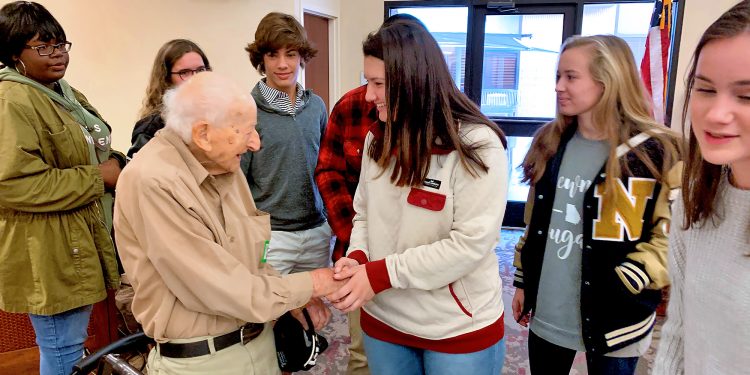 Seventy-five veterans who live at Christian City were honored with daily events and activities during the week of Veterans Day. Individuals and groups from surrounding communities joined in the celebration to honor the men and women of Christian City who served in World War II, Korean, Vietnam and Gulf Wars. 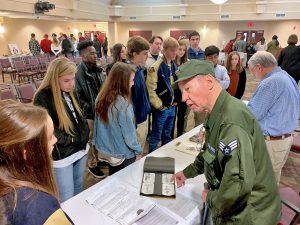 President and CEO, Keith Horton, called each veteran’s name and presented a commemorative pin to each veteran. Horton served in the United States military for 20 years, including his position as deputy director of the Combat Arms Force Management Division for the Pentagon. He retired at the rank of Lieutenant Colonel in 2006. Horton joined Christian City as President and CEO in July 2019.

The commander of Creekside High JROTC, Col. Ret. George Fields, returned to the campus on Tuesday evening with several members of VFW 6649 in Fairburn for an evening of fellowship with the veterans who currently reside at Christian City in active senior homes, the assisted living center or skilled nursing & rehabilitation center.

Thanks to Newnan High School’s history department, a Wednesday Student-Vet Connect event allowed the juniors and seniors who are enrolled in an advanced elective Military History class at NHS to talk one-on-one with a 100-year-old World War II veteran, William Muckenfuss, a current resident of the Christian City Skilled Nursing Center. The 55 students who visited also talked one-on-one with several veterans about their experience during the Vietnam War.

Student-Vet Connect events started at Newnan High in 1995 with the 50th anniversary of World War II. Twice a year, 60-80 veterans participate in the event at the Armory in Newnan. “Over the last 25 years, we have introduced about 10,000 students to veterans through this program,” said Stephen Quesinberry, NHS History Department Chair.

Approximately 40 – 50 NHS students are also involved in the “Adopt a Vet” program, a student idea that came out of the History Club. The vets and students meet a few times a year and some have formed lasting relationships beyond high school graduation. “One of the goals of the program is to have the kids become comfortable talking with people other than their peers,” Quesinberry said.

The week-long celebration continued Thursday afternoon with a visit from Dale Barnett, US Army Ret., and National Commander of the American Legion from 2015-2016. Barnett spoke at “A Patriotic People’s Club” event in the Christian City auditorium.

On Friday afternoon, a Wall of Honor featuring portraits of many of the veterans who currently reside at Christian City was unveiled at the Recreation Center. As he welcomed the veterans and their family and friends to the vent, CEO Keith Horton stood before two World War II veterans, Albert Sessoms and Bill Muckenfuss, as he reflected on his desire to do something spectacular for our vets. “We stand on the shoulders of those who served in all conflicts. If not for those who served, we would not be where we are today,” Horton said.

“I’m grateful for the work of Tyler Garcia, our Director of Campus Recreation, in organizing a full week of events to honor our veterans,” Horton said. He also recognized Myrna Johnson, Christian City’s Director of Life Enrichment and a veteran who served five years in the U.S. Marines. Johnson presented “The Missing Man Table” in remembrance of POW and MIA veterans. Following the ceremony, attendees enjoyed refreshments and fellowship with the veterans of Christian City.