Ask the County Agent: What about the new, invasive tick here in Georgia? 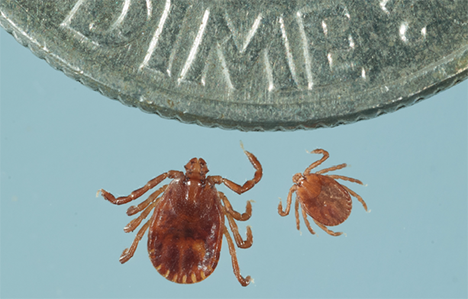 Pictured above: Longhorned Ticks are small. The adult on the left is only 1/8th inch long, while the immature tick on the right would not cover the ‘D’ on the dime included for size comparison. Photo by Rutgers Center for Vector Biology.

QUESTION: I have heard there is a new, invasive tick in Georgia. Should I be concerned?

AGENT: Ticks are always a concern in the Southeast. Among other things, they can be carriers for Lyme disease, Rocky Mountain Spotted Fever and Alpha-gal, the red meat allergy that is caused by ticks.

So why is this tick of particular concern?

Unfortunately, this invader looks like many of our native ticks, small and brown before it feeds, then swollen and gray after it feeds. So what can you look for? Extremely high numbers of ticks per animal can be a tale-tale sign because each tick can produce over 2,000 eggs. Longhorned Tick populations expand rapidly and frequently exceed hundreds per animal. If you find a large number of ticks on an individual animal, call your veterinarian and report it to the Georgia Department of Agriculture’s Animal Health office at 404-656-3667.

Veterans Day – Countless Thanks to our ...