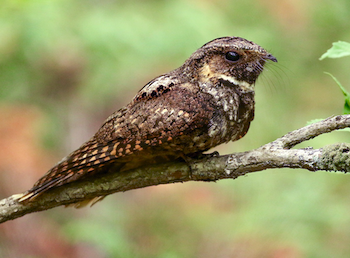 There was a time when I considered the whippoorwill outside of my window was indeed, my whippoorwill.

His song would lull me to sleep and it became part of my nightly routine. I didn’t know much about things like whippoorwills before I married, so it was interesting to hear my husband relay all the facts about the bird when he realized how much I enjoyed listening to its song.

The whippoorwill began singing near my window when we lived in Moreland. It was in the early 1980’s, and that bird sang every single night until he migrated for the winter. At some point I would almost forget about him, and then his night song would remind me how long it had been since I heard his call.

A few things happened with “my” whippoorwill. First of all, it wasn’t mine at all, but my husband and I adopted the idea that the bird was there each night to sing me to sleep.

It was 1998 when we left that home in the woods of Moreland and moved to a neighborhood near Savannah. Though our move was in June, I didn’t hear the first whippoorwill. It was difficult to sleep at all.

On one glorious evening the following spring, I was getting ready for bed when I heard him.

“Whip-poor-will! Whip-POOR-WILL!” I was so delighted that I woke up my husband.

“He found me!” I exclaimed. Ninja Man blinked and surely, wondering who in the world “found” me at that hour of night, just looked at me like I was nuts and went back to sleep.

The next morning at breakfast, I filled my husband in on everything.

“Don’t you see? We moved, he went flying high and low looking for me and lo and behold, here he is! My whippoorwill FOUND me!”

Ninja Man heard him that next night and he has never, ever mentioned that it was most certainly a different bird. Inside, I knew that of course it wasn’t the same bird, but a girl can dream, right?

We moved eight years later to a tidy neighborhood without many trees for a whippoorwill to enjoy. Despite the many hours spent on a porch listening for that familiar song, my whippoorwill never came to that house at all.

We returned home to Coweta in 2017. I’ve been listening for my whippoorwill ever since the first night in our new home. We are once again in the country with lots of woods and all the bugs and nesting possibilities my little bird could ever want, but alas, he has yet to arrive.

A group called Partners in Flight states that the whippoorwill is in “steep decline” with a 69% drop in population from 1966-2010. But I’m hopeful that “my” whippoorwill has just realized our last move and will show up any day, or night. One thing is for sure, I don’t want to miss a moment of his song.

Kathy Bohannon is a Christian humorist, wife, mom and avid crafter. She can be reached at [email protected]