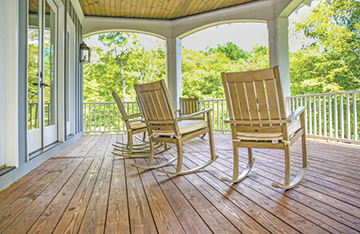 I have a pair of overalls that are more like a treasure than multipurpose work clothes.

Thirty-seven years ago, we lost our home in a midnight fire. My husband, three-year-old daughter and I got out but we had nothing more than the clothes on our backs and the cars we drove.

My in-laws lived in the land adjacent to us and I needed something to wear besides my nightgown. I’m built quite differently than the women in my in-law family, so my father-in-law Jack offered a pair of his overalls. I graciously accepted.

Jack wore overalls daily, unless another occasion called for pants and a shirt. I remember him walking through the pastures and down the hill to see his grandchildren. His hands were never empty; there were gifts of tomatoes, onions, carrots or whatever he had plucked from his garden.

Jack had a certain walk. His tummy thrust out, his body would shift from left to right as he took his short, quick steps. His hair was curly and white as snow. And I was always delighted each time I saw him walking down the hill toward our house, most often with those overall pockets bulging with whatever tools he was using, or found along the way.

I wore those overalls the morning after the fire, as my husband and I went to Newnan to buy clothes. My hair was singed, I hadn’t slept and I was wearing my mother-in-law’s tennis shoes. I’ll never forget the sales woman who knew me well and always helped me choose the right clothes for my corporate job.

“Honey!” she exclaimed as we walked in the store. “What happened?” I began to cry and my husband said, “We’ve had a fire and she needs clothes for work.” The woman knew my tastes and everything she selected was perfect. She added some jeans and t-shirts to the pile, and we went on our way.

I put the overalls on again a few days later as we went to clear what was left of our home. Days turned into weeks, weeks into months. Those overalls served me time and time again as we eventually began building our new home.

By the time we were ready to finish the interior, I was expecting our son. The overalls were easily adjusted for the expanding waistline, and releasing a button or two made for great maternity work clothing.

I’m not sure if Jack actually gave me the overalls or if time just passed and I never gave them back. The paint stains on them are as old as my son and as recent as a year ago.

The overalls were there in the days after the recent EF-4 tornado hit our precious City of Homes. I wore them to help at our church, as we began to salvage whatever we could. I had planned to work even more, but I’m 62 years old now and unlike those overalls, things don’t work as well as they used to.

With all the devastation in our sweet Newnan, I know Jack would be there if he were still with us. And of course, he would be wearing his overalls.

Kathy Bohannon is a freelance writer living in Newnan with her husband, Ninja Man. An avid crafter, Kathy hosts tutorials at Kathy Bohannon Creatively Blessed on Facebook and YouTube. Kathy can be reached at [email protected].