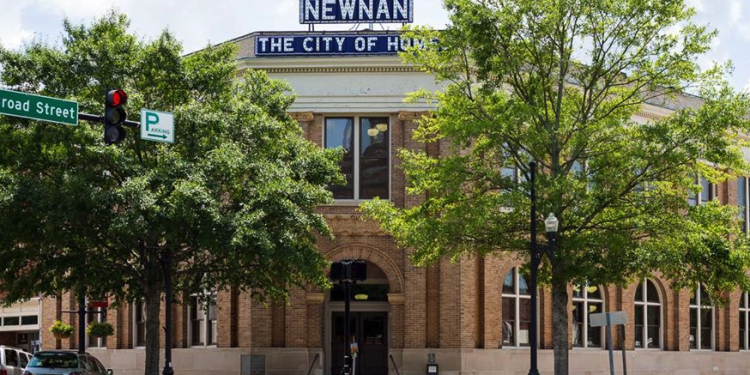 Residents will be able to drink alcoholic beverages outside and throughout the downtown Courthouse Square area under a temporary ordinance approved by the Newnan City Council.

The ordinance, passed to help local businesses affected by the coronavirus shutdown and restrictions, also allows restaurants and local merchants to set up tables on sidewalks, public alleyways and parking spaces for dining or sales.

These temporary changes are in effect until Jan. 30, 2021, unless terminated or extended by the mayor and city council.

“From the hours of 12:00 noon to 12:00 midnight on Monday through Saturday, alcoholic beverages purchased from a licenses establishment for on premises consumption may permit a person and that person may exit the establishment and possess and consume an alcoholic beverage on the public sidewalks and alleys and streets where permitted with in the City’s Central Business District,” the ordinance states.

The city’s Central Business District includes the downtown Courthouse Square area and various nearby side streets.

Any container having alcohol in it will need a special sticker attached.

The ordinance basically gives the city manager the authority to waive certain existing ordinances such as the current ban on drinking alcohol outside in public. Businesses would not need to get special permission for anything listed under this temporary ordinance. In other words, they can put out tables without getting city approval.

Regarding restaurants and merchants, the city manager can also waive existing laws to allow “expanded use of the sidewalks, alleys, parking spaces and other public spaces shall include but not be limited to outside sales of retail items and placement of tables and chairs for outside seating by restaurants.”