Publisher’s Page: ‘The Interview’ reveals an inside look at Coweta 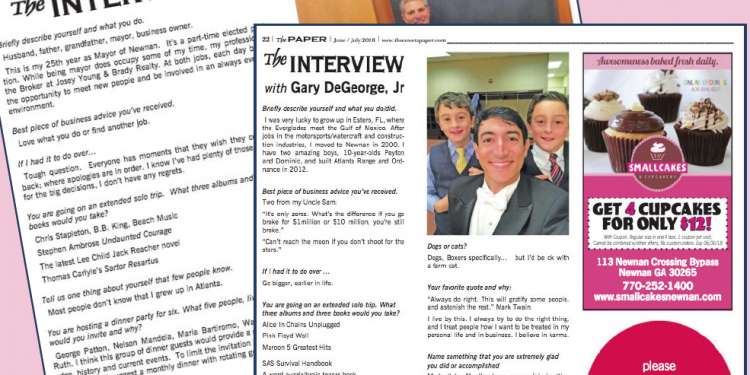 There is, with the acknowledgment I’m saying the obvious here, a lot of hatred in this country right now.

Left versus the Right. White versus Black versus Hispanics. Build a wall; Won’t happen. Pro-Life, Pro-Choice. The list goes on. And I don’t think the powers that be are doing much – on either side of the aisle in Washington – to improve things. In fact, I blame our leaders for most of the discord.

And that leads me to look over my own community here. And boy, do we have some differences.

There are, seriously, people in this community who prefer cats over dogs. There is a rabid and proud Cleveland Browns fan among our midst. Some folks apparently prefer raw vegetables over pizza.

I know, that last one got me too.

There are people who have jumped out of airplanes while serving in the 101st Airborne. We have others who prefer to fly planes instead. We have some ardent liberals and a former assistant secretary for the Bush (Senior) administration.

We’ve got someone who sells guns for a living and others who have never fired a gun in their life. Same for a ninth degree black belt and those who have never thrown a punch. We have folks who have lived here for a couple of years, others have been around for more than 10 generations and may have descendents who helped Noah build the ark.

I know this from reading answers from 32 locals to date who have submitted to “The Interview” column in The Paper. Besides the above mentioned, we have had the mayor, a superior court judge, doctors, restaurant owners, citizens of the year, investors, artists, writers and many more from just about every walk of life.

Pizza and Mexican food are among their favorites, discounting the aforementioned veggie guy. They love to sail, hike, read, plant, sow, fish, fly fish, ski, hang out with grandkids, hang out with their kids, cook, build tables, draw, travel, cruise …

As I said, lots of different interests and passions.

One drank a yard of beer in front of 200 people. He was naked at the time. Another biked across the entire United States. One individual whom I have never seen out of a nice suit and tie is a diehard Grateful Dead fan.

Given the choice of inviting any five people to dinner, dead or alive, a lot of family would be among the list. Historical figures, Gandhi, Caesar, Jesus, the Apostle Paul, Dr. King for example, would be there too, as well as some amazing musicians. Truth be told, I would be honored to just listen in on some of those conversations.

Heading out on a solo trip with three books and three albums to take along, the Bible was among the top, as well as some type of survival guide. And I will admit being shocked at some of the musical tastes. There are some older people around here who really like to rock out.

I would encourage you to read what these amazing people had to say about questions like “if given the chance to do it over…” and “advice to your younger self.” Just head over to www.wintersmedia.net -> News -> The Interview.

I think you will learn a lot. I know I did.

My point is this. We are very different here. Yet we don’t shut down the government, we don’t burn our draft cards down on Main Street and nobody cares what color the chef is at one of their favorite restaurants.

And that’s a good thing. And we are very fortunate here in our little corner of the world.

Now, if we could only get those folks up In Washington to play nice …

Barbers on the Boulevard: A Gentlemen’s Barber ...