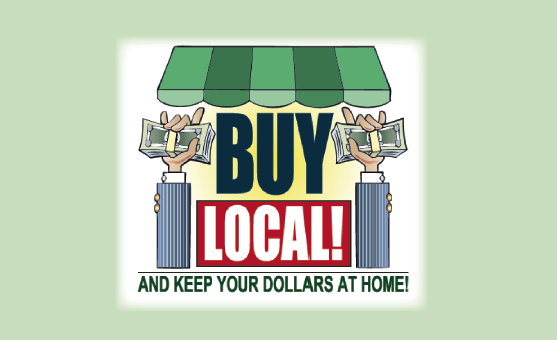 “When you see something at an independent store that costs a little more, try to remember that Amazon & Target don’t buy ads in the local football program, donate prizes to your silent auction and probably wouldn’t let you have a bake sale in front of their store.”

I will add Facebook and Google to that, which I will discuss in a moment.

The above mentioned post came from @gillyweedbliss, aka Gillyweed, a wonderful store in downtown Newnan located at 21 West Court Square owned by Valerie Dumas. When we first moved to Newnan, we ended up buying their – Valerie and Albert (husband) – house. Small town.

I liked that post so much I reposted it. And not long after people started responding: “Absolutely,” “thanks for sharing,” “so true” and so forth.

If we don’t support local businesses, then there won’t be any. And you won’t have a silent auction for (fill in your favorite charity of choice). And many of your friends (put in their names) with lose their livelihoods.

I love seeing “Shop Local” signs in local businesses. I do not like hearing “we do all our advertising (read shopping) on social media like Facebook and Google.”

Because, you know, print is dead, radio is dead, vinyl records are dead. Welcome to the 21st century Pops.

The Shopper has been around since 1989. We started “The Paper” less than two years ago with 2,500 copies and 35 distribution locations. That circulation has tripled to 8,000 ad we are at more than 140 locations.

The Newnan Times-Herald has been here for more than 150 years – making it the oldest business still in existence in Coweta County.

Something must be working.

Or, just buy it on Amazon (maybe not the baby chicks). Because it’s easy, right? Just make sure and send an email to Shane (Prophett) and tell him you’re sorry he closed after all those decades.

Radio? We’ve got a local station 99.1 WQEE right in downtown Newnan. Mr. Personality and several other local residents even have their own shows or appear as guests there. And Magic 98.1 has a studio a stone’s throw away from Newnan High School. Radio is still around.

Oh and vinyl records? Head over to 28 S. Court Square and tell Vinylyte Records their business is dead. These are the same guys who open their doors for Newnan Unplugged to give local musicians a free stage every month. An aside – thank you for that.

For the record, we use social media – a lot. We have Facebook, Instagram and two Twitter accounts. We promote stories of interest on all of those media. We promote our advertisers on those platforms as well.

However, Facebook, Instagram and the others are simply another tool we use to help our local businesses who advertise with us in The Paper and The Shopper. We also advertise on WQEE and Magic 98.1 as well.

Although we use social media, we have little interest in supporting multinational corporations over local businesses. And that includes “boosting” on Facebook.

The number of negative headlines about Facebook, from privacy data theft to Russian interference, is staggering. And Amazon is getting ready to spend $800 million in the next quarter alone to push Prime membership to next day delivery.

There is not a local business that can compete against Amazon for shopping or Facebook or Google on advertising.

Rather, how about shopping local as much as possible – from eggs to underwear, cars to shoes, t-shirts to, yes, advertising.

It’s somewhat of a Catch-22 to ask customers to “shop local,” but then spend all advertising/marketing dollars with Google and Facebook.  How is that different from “shopping” for everything on Amazon?

Here are your options: vibrant businesses in Newnan, Senoia, Thomas Crossroads, Sharpsburg and elsewhere supporting local families and local schools and local governments; or, deserted streets and bankrupt cities with Google, Facebook, Amazon and others vying to be the first $2 trillion company.

Shop local in every area you can and as much as you can.

Monarch House: When was the last time ...