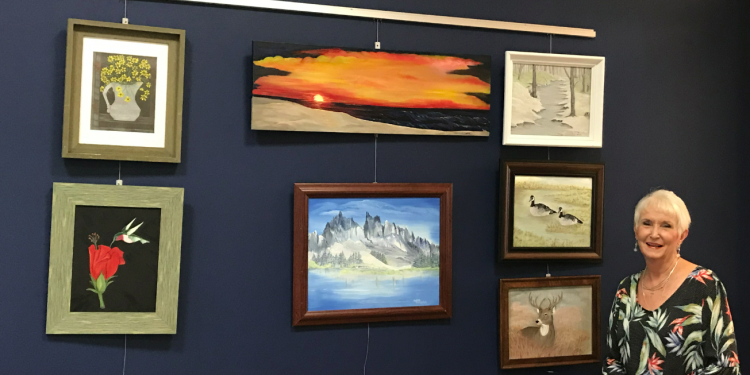 The Newnan Coweta Art Association has selected Sandra M. Carter as its featured Artist of the Month for October. Carter’s art will be featured in the City Manager’s Office at City Hall until Oct. 31.

Each month, local artists are named Artist of the Month. The City has collaborated with the Newnan-Coweta Art Association and local art galleries on this project. It gives local artists the opportunity to display their work in City Hall and a chance for the city to support the arts.

About Sandra M. Carter
Sandra M. Carter has lived in Newnan since 1968 and is a Charter Member of the Newnan Coweta Art Association, joining the month it was founded, and exhibiting in the very first Powers Crossroad Art Festival. Carter has had a love of art from her earliest memories, having won her first award at the age of 12 when one of her pictures was chosen as part of a special Student Exhibit to hang in the National Museum of Art in Washington, D.C. Her work has been exhibited in Georgia, Washington, D.C., and Alabama. She has won numerous awards over the years. Her favorite mediums with which to work are oils and pencils, both color and black and white. Her most requested works are for pet portraits, all animals, sunsets, and landscapes.

While the visual arts have played a major part in her life, she focused most of her adult life on music, having earned a music scholarship to LaGrange College. She served as Minister of Music for Southwest Baptist Church in LaGrange for nine years before moving to Newnan with her family in 1968. She continued her music career at First Baptist Church of Newnan for over 20 years teaching choirs and ensembles. She was the creator of the School of Arts which the church officially named the Sandra M. Carter School of the Arts in 2000. The school has a wide variety of creative classes and presents many and varied concerts throughout the year.