Shopper Kitchen: The Story of My Curried Butternut Squash Soup 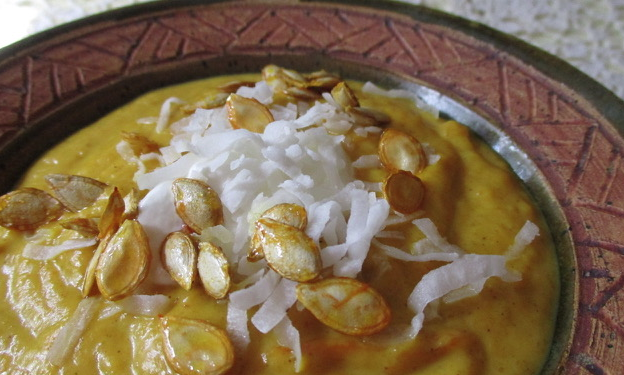 Early in my writing career, I had the pleasure of interviewing some authors who became literary legends. One of them, Anne Rivers Siddons, passed away last month. Many fans shared tributes online, but what I remember about her is that when she came to Scott’s Bookstore, she was kind to a young woman who hadn’t the foggiest notion of how to interview a big-time author. Fortunately, I improved my interviewing skills as I met novelists like Siddons and Nora Roberts and the delightful Lee Smith, whose memoir, Dimestore: A Writer’s Life, I recently devoured.

I love stories, and I love the people who create them.

People who get paid to know such things claim there are only seven different plots. Others say no, there are only two: 1) Somebody takes a trip. 2) A stranger comes to town. Then, I heard someone say that these are the same story told from two different points of view.

I think about those theories whenever I’m researching recipes and noting the often-slight differences between them. Many of us like to cook creatively, and I smile every time someone tells me they’ve made one of my Shopper recipes, then adds, “but I made mine with thus and so.”

We’re all trying to write our own story.

With butternut squash fresh from my dad’s garden, I decided that surely there was a soup recipe calling for butternut squash, spices, and heavy whipping cream. If it exists, I didn’t find it. Rachael Ray’s butternut squash soup recipe had garlic, which I wanted in mine, but also carrots and onions, which I didn’t want. Martha Stewart’s called for orange juice, interestingly enough, but also onions, a deal breaker. (I like onions, but they can be overpowering.)

Finally, I just roasted my squash as I usually do: sliced in two, a little olive oil sprinkled on top, and baked for an hour at 400 degrees. The flesh will practically slide out of the skin. I added the ingredients I liked and crossed my fingers. The result was as rich and creamy as I’d imagined. I hope some of you try this recipe—or your version of it—and enjoy the flavors of fall!

Add butternut squash to food processor and pulse until desired consistency. (I like it a little thick and chunky.) In a medium saucepan over medium heat, melt butter, add chopped garlic, and cook garlic for 2 to 3 minutes. Add butternut squash and combine well. Next, add the curry powder, cinnamon, sea salt, and nutmeg and combine. Turn heat to low and add whipping cream. Use a wire whisk to incorporate the cream and prevent scorching, stirring constantly for about 5 minutes. Remove from heat and serve with your favorite garnishes. Yields 4 servings.

Deal Finder: Ways to Save on Legal ...