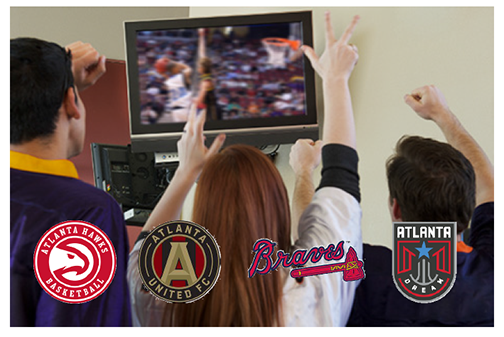 Three of four Atlanta professional sports teams will appear on television in this week (June 14-20).

It’s the NBA 2nd Round of Playoffs for the Atlanta Hawks which find themselves trailing 2-1 against the Philadelphia 76ers in a Best-of-7 series. Game 4 is tonight in Atlanta with TNT carrying the telecast at 7:30 p.m. The 76ers defeated the Hawks 127-111 on Friday to take a 1-game advantage. The remaining games of this series are scheduled for this week with Game 5 on Wednesday at Philly. Games 6 and 7 are if necessary games.

In baseball, the Atlanta Braves snapped a four-game losing skid on Sunday with a 6-4 win over the Miami Marlins. The win ended a road trip of 6 games that saw the Braves win only twice. Atlanta returns for a 6-game homestand beginning Tuesday with Boston coming in for a two-game set and then the St. Louis Cardinals for four. The Braves are 30-33 overall and 5 games back of the first-place New York Mets in Major League Baseball’s East Division.

Atlanta United returns after a break on Sunday, June 20 when it hosts the Philadelphia Union on ESPN. United got a 2-2 draw with Nashville FC in their last action on May 29. United’s Major League Soccer record stands at 2-1-4 and their 10 points in the standings is good enough for 8th place in the Eastern Conference.

The Atlanta Dream of the WNBA will be in action just once this week and the game will not be televised locally. The Dream, now 5-6 on the season, is in 5th place overall in the WNBA standings. Last night, the Dream raced past the Washington Mystics 101-78 here in College Park and travel to face them again on Thursday.

Below are this week’s schedules and how to watch when and where to watch each team on TV.