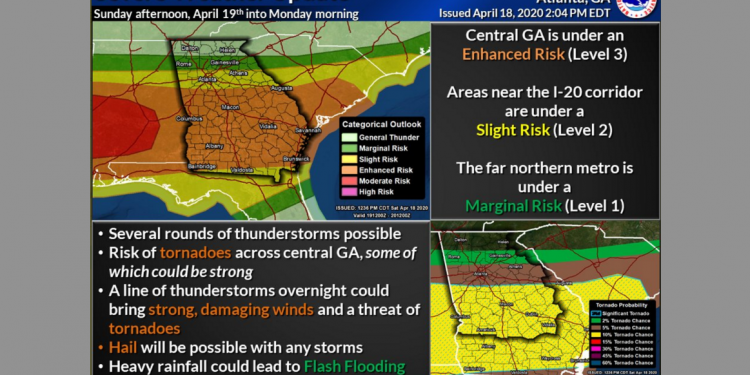 Be ready for a roller coaster ride of heavy rain, lightning, wind and even possible tornadoes today and overnight into Monday morning, according to the National Weather Service in Peachtree City.

Scattered to numerous severe thunderstorms are expected across central and portions of north Georgia this afternoon and later tonight, including Coweta County. The National Weather Service says the greatest threat is expected along and south of I-20 with central Georgia most favored for tornadoes and hail.

Locally, a 100 percent rain chance is in the forecast for today and tonight with rain amounts of 2-5 inches possible. As a result, a Flash Flood Watch will be in effect beginning at 11 a.m. until Monday morning for Coweta and surrounding counties. Rain will move out of the area by noon on Monday as sunny skies return.

Looking at the forecast, rain will be in the area for the next 24 hours along with the chance of the strong storms. It will come in various waves throughout that period, sometimes light rain and other times strong thunderstorms.

Winds will remain from 5-10 mph out of the south and southeast, gusting to 15 mph and higher during storms. The winds will then turn from the northwest overnight at 10-15 mph with gusts to 20.

Here’s the official forecast below from the NWS …

SUNDAY – Showers and possibly a thunderstorm, mainly before 1pm, then showers and thunderstorms after 1pm. High near 65. Southeast wind around 5 mph. Chance of precipitation is 100%. New rainfall amounts between 1 and 2 inches possible.

SUNDAY NIGHT – Showers and thunderstorms. Some of the storms could produce heavy rainfall. Low around 56. South wind 5 to 10 mph, with gusts as high as 15 mph. Chance of precipitation is 100%. New rainfall amounts between 1 and 2 inches possible.

MONDAY – Showers and thunderstorms before 11am, then a slight chance of showers between 11am and noon. High near 71. Northwest wind 10 to 15 mph, with gusts as high as 20 mph. Chance of precipitation is 80%. New precipitation amounts between a tenth and quarter of an inch, except higher amounts possible in thunderstorms. 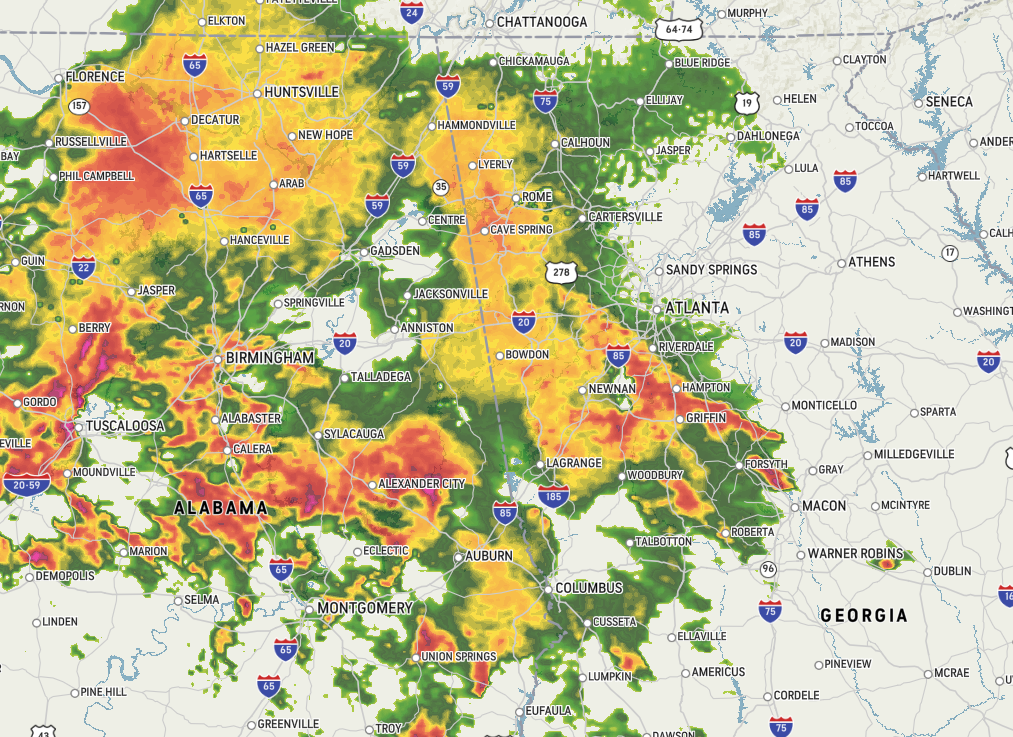 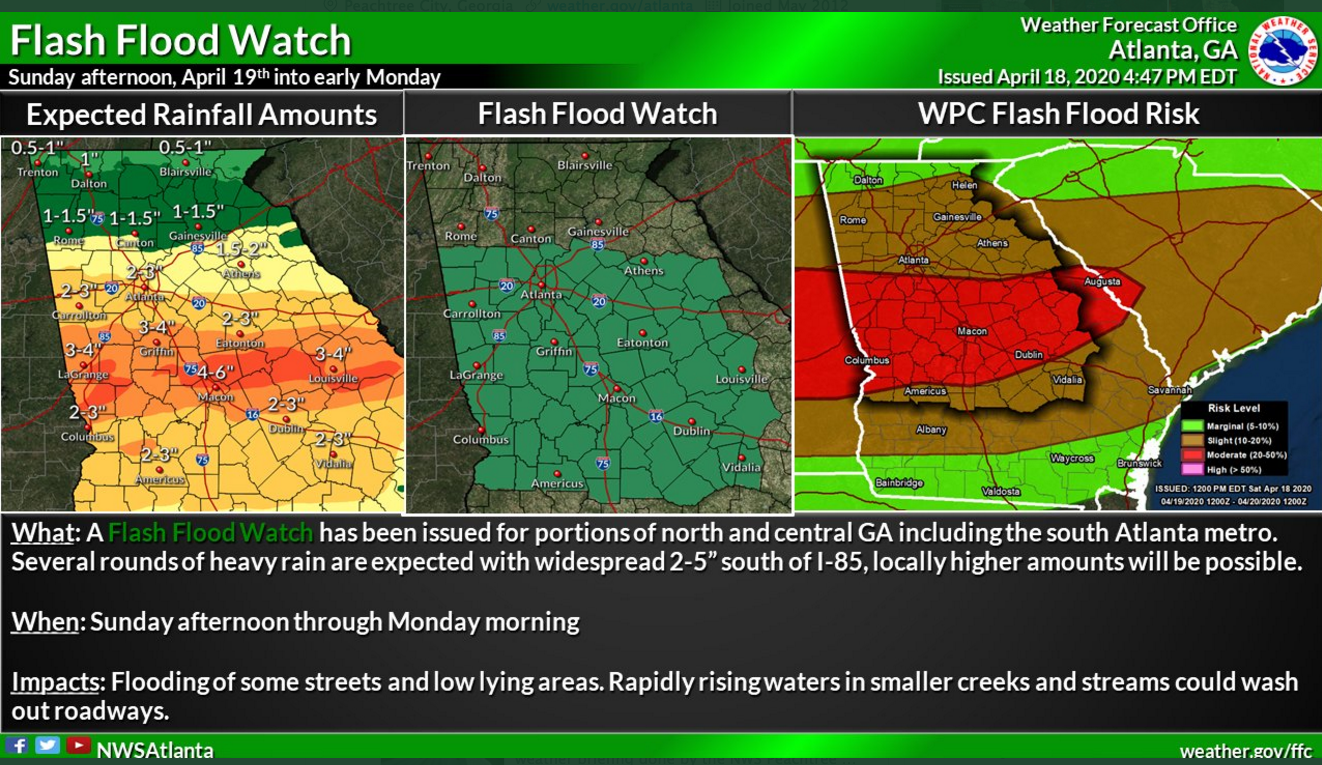 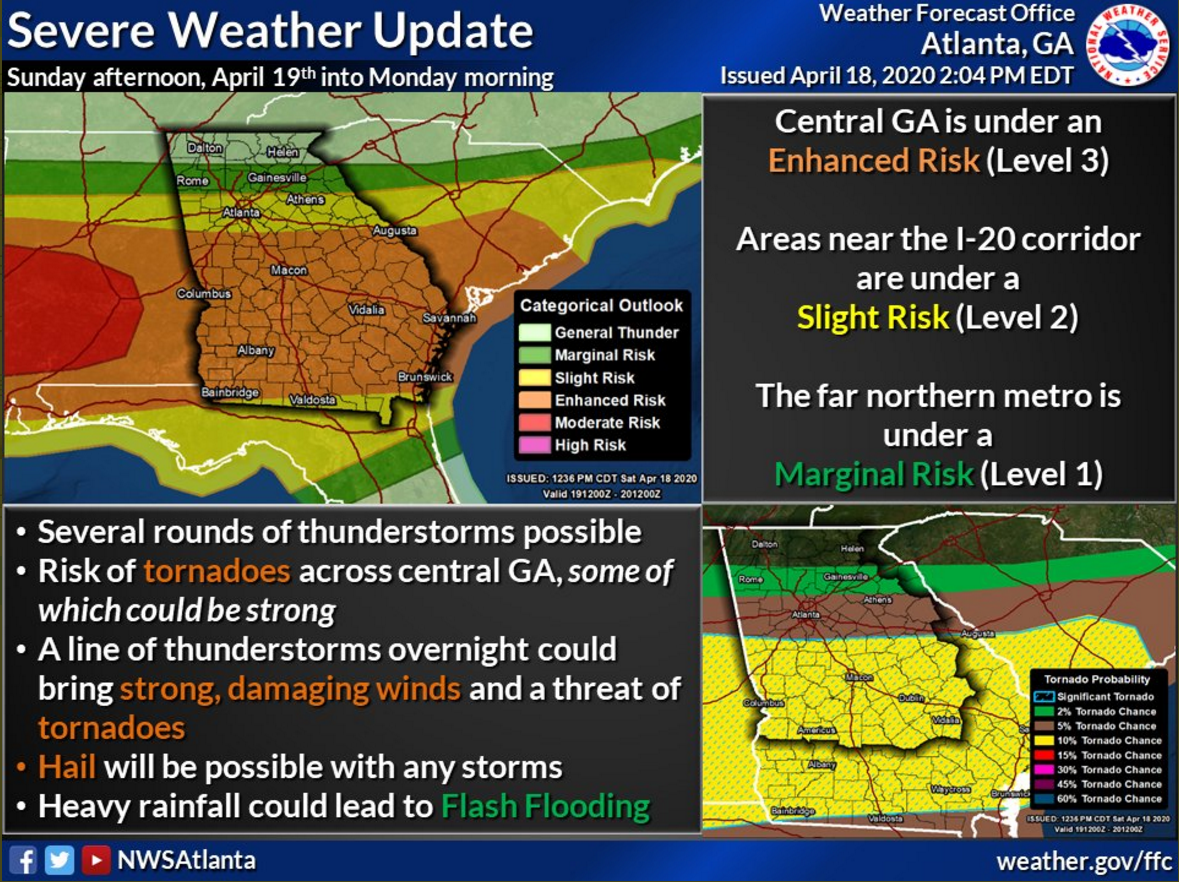