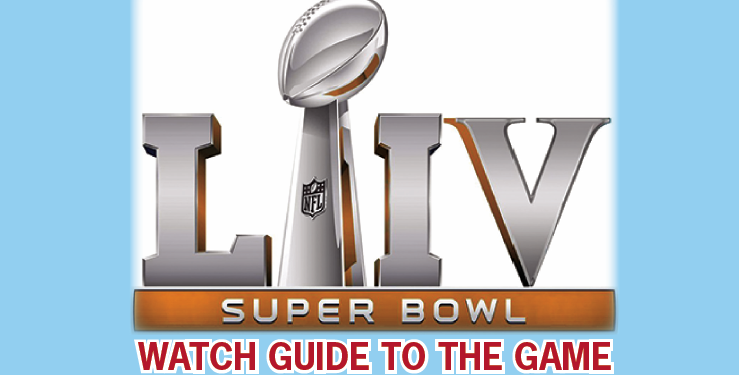 Super Bowl Sunday rolls into most everyone’s life this weekend. It’s Super Bowl LIV with the San Francisco 49ers squaring off against the Kansas City Chiefs.

Below is some of the basic information most TV observers will want to know regarding the big game.

SCENE SETTER
San Francisco enters the game as the National Football Conference Champions with a 15-3 overall record. The 49ers defeated the Minnesota Vikings (27-10) and Green Bay Packers (37-20) to reach the Super Bowl for the eighth time. San Francisco has won five previous Super Bowls, the last was in 1994.

Kansas City comes in at 14-4 overall and is the American Football Conference Champions. The Chiefs rallied for a 51-31 victory over the Houston Texans and a 35-24 win over the Tennessee Titans to make their 3rd overall appearance in the Super Bowl. Kansas City last won the Super Bowl 50 years ago, defeating Minnesota in Super Bowl IV.

The game will be played at Hard Rock Stadium in Miami Gardens, Fla. It’s the sixth Super Bowl this stadium has hosted.

The early betting line has Kansas City as a 1.5-point favorite and the 49ers/Chiefs over-under at 54.5 points.

Super Bowl coverage begins at 2 p.m. on FOX with their Pregame Tailgate Show.

PREGAME / HALFTIME
Yolanda Adams will sing “America The Beautiful” and Demi Lovato will sing the National Anthem during pre-game ceremonies.

This year’s halftime show will be co-headlined by Shakira and Jennifer Lopez.

COACHES / QUARTERBACKS
Most of the focus during the televised portion of the game will be on both head coaches and quarterbacks.

Andy Reid is the Kansas City Chiefs head coach. He’s in his 21st season as a NFL head coach and owns a 207-128-1 record. His quarterback is Patrick Mahomes, who is in his 3rd year in the league. Mahomes has thrown for 4,031 yards this season with 26 touchdowns and just 5 interceptions.

Kyle Shanahan is the San Francisco 49ers head coach. He’s in his 3rd season as a NFL head coach and many folks around here remember him as the Atlanta Falcons’ offensive coordinator on their last trip to the Super Bowl. Shanahan owns a 23-25 overall mark. His quarterback is Jimmy Garoppolo, a 6-year veteran. He threw for 3,978 yards this year with 27 TDs and 13 INTs.

WINNERS / LOSERS
Only one team gets to hoist the trophy awarded to the winners – the Vince Lombardi Trophy. The 22-inch tall trophy is made entirely of sterling silver and weighs 7 pounds.

GEORGIA CONNECTION
Three players in Sunday’s game have Georgia connections, albeit playing college football in the Peach State. For the 49ers, running back Matt Breida is in his third season in the NFL and played at Georgia Southern. He played high school football in Florida.

The Chiefs have a pair of players with Georgia ties – receiver Mecole Hardman and placekicker Harrison Butker. Hardman is a rookie this year and played at Georgia a year ago. He played high school ball at Elbert County. Butker is in his third season in the NFL and kicked during his college days at Georgia Tech. He played high school football at The Westminster Schools in Atlanta.

OTHER ENTERTAINMENT
If the Super Bowl is not totally your thing but pets are, then you are in luck. The Puppy Bowl XVI 2020 airs at 3 p.m. Sunday on Animal Planet. And Kitten Bowl VII airs on the Hallmark Channel at 2 p.m. Sunday.