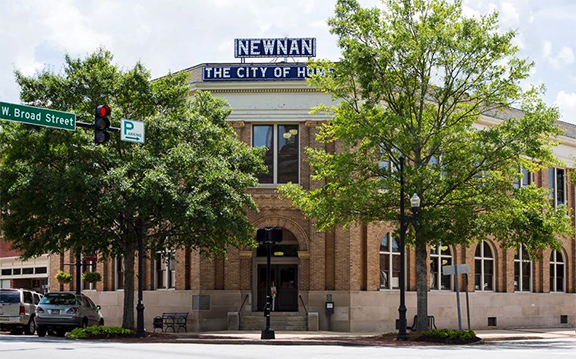 Walking into a building every day that was built in the early 1900s is one of the greatest privileges of my life.

The Newnan Carnegie Library was opened in June 1904. There is so much that has occurred within and without these walls since then. It was just after the turn of the century and a lot was changing as the world moved into the 20th century. The Louisiana Purchase State Fair opened in St. Louis (where the ice cream cone was invented!), the Panama Canal land was purchased and started being built, Teddy Roosevelt was president, there was a great fire in Baltimore, and the first underground subway opened in New York.

And here in Newnan, thanks to the efforts of 17-year-old Charles L. Thompson and a grant from Andrew Carnegie, there was a public library available and open to all. The library stayed open through WWI, The Great Depression, WWII and so many other historic times. And then during 1987 to 2007 when it served as a courtroom and DA offices it saw a new kind of change. Due to the tireless efforts of a grassroots group of citizens it reopened in September of 2009 as a freshly renovated library.

Today, you can still see the historic roots of the library when you look at the beautiful fireplaces, or walk up the super steep side stairs and look at the beautiful outside façade. I love hearing stories from patrons who have such fond memories of their childhood at the library. People remember the Saturday night dances upstairs when it was the first time they heard rock and roll. They tell me about Girl Scout meetings and how there was a rifle shooting range upstairs. My husband tells me the library smells the same as it did when he was child even after the renovation. Also, the old fire station used to be right next door to the library! I love looking at old photos. Not just to see how the inside and outside of the Carnegie has changed, but also how the city as a whole has changed around the Library.

As more and more Carnegie Libraries fall into disrepair or become something other than libraries (have you seen the Apple store Carnegie? Horrifying!) we must continue to cherish this treasure which is a cornerstone of the Historic Downtown Square. We are so thankful to be in this wonderful community. Interacting with residents is the most fun and we welcome everyone to the Carnegie whenever we are open. And if you want to find out more about the Carnegie’s history, then come on in for a tour and we will talk your ear off and send you home with a stack of books!

Susan Crutchfield is the director of the Carnegie Library in Historic Downtown Newnan. She also is a professional photographer and enjoys volunteering with the Newnan ArtRez and the Newnan Theatre Company.

Coweta News, Notes and some Musings