The Film Fix: Big-Screen Reviews – Midsommar, Lion King, Once Upon A Time 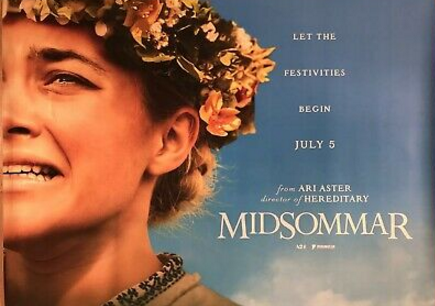 Below are reviews of this month’s big-screen movies. The rating system … A “Fix” is recommended with a rating between 6 and 10. A “No Fix” with ratings of 1 to 5 is not recommended.

Writer/director Ari Aster continues to colorfully explore the depths of despair in a soon-to-be cult favorite.

When Dani (Florence Pugh) experiences a ghastly family disaster, she decides to go on a trip with her boyfriend, Christian (Jack Reynor), and his quirky assortment of university pals.  Codependents Dani and Christian have a strained relationship only made more complicated by Dani’s indescribably horrific loss. But maybe some time out of the country will do them both good.

One of Christian’s running mates is a foreign student named Pelle (Vilhelm Blomgren).  A sensitive fellow, Pelle attempts to comfort Dani, telling her of his own tragic past.  But Dani is walled off, except to Christian, who is ill-prepared or unwilling to see beyond the surface.  The vacation takes them to Pelle’s home, an idyllic commune somewhere in rural Sweden. But what was immediately a beautiful paradise slowly is revealed as something still idyllic but at a deadly price.

Elements of 1973’s “The Wicker Man” are blended with Aster’s uncompromising and timeless examination of bereavement and our personal coping methods. “Midsommar” isn’t for the squeamish, but it will certainly stay with you for days thereafter.  Less commercial than Jordan Peele’s “Us,” Aster’s film is sure to generate cult interest while falling way short of Peele’s staggering box office success. But both films are part of a modern horror whole, offering up multiple interpretations depending on your own headspace.

“Midsommar” contains moments of unspeakable horror, but none are thrilling or exploitive.  It’s also funny. Tension is released as the youngsters incredulously survey their surroundings, both beautiful and dangerous.  It’s a frightening piece of filmmaking, marred perhaps, for some viewers, by a lengthy, excruciating conclusion. Aster pulls no punches.

A necessarily “bridgy” affair, “Spider-Man: Far From Home” manages to bring together the traumatic events of “Avengers: Endgame” and hint at what’s next for the MCU.

Tony Stark may be no more, but Peter Parker (Tom Holland) still grieves.  And even though he just helped save the world, for teen Peter, it’s back to high school.  His five-year absence due to Thanos’ intervention is described in school announcements as a “blip.”  And conveniently “blipped” with him for that period was his best friend Ned (Jacob Batalon), his love interest Michelle “MJ” Jones (Zendaya), and school bully, but Spider-Man super fan, Flash Thompson (Tony Revolori).  Along with other teens, they venture to Venice, Italy, for a summer trip.

Of course, the world will need saving again.  And when former Tony Stark assistant Happy Hogan (Jon Favreau) tries to get Peter to take an assignment from Nick Fury (Samuel L. Jackson), Pete sends the SHIELD chief to voice mail.  But a new threat emerges in the form of elemental monsters, and Spider-Man has to suit up and join forces with new comer superhero Mysterio (Jake Gyllenhaal). With his friends in tow, the friendly neighborhood wall-crawler goes global.

Bursting with youthful exuberance and hipster flare, “Far From Home” is wondrous entertainment.  By keeping Parker still in high school, and using the “blip” to keep his core crew intact, what might seem like contrived manipulation holds together nicely.  This is a wildly over-the-top comic book adventure, after all, so, a little artifice is expected.

Capably bridging the MCU narrative that came to an epic conclusion with “Endgame” and playfully hinting at the films to come, this Spider-Man adventure is thankfully a bright and cheery superhero outing.  And like the best film featuring the character, Sam Raimi’s “Spider-Man 2,” it’s a movie that deals with the serious burden that has been placed on a young man’s narrow shoulders.

Known for his large physical presence and droll delivery of dialogue, Dave Bautista rumbles through this unlikely buddy copy comedy like a freight train.  And for the most part, it’s entertaining, especially the playful banter he has with comedian Kumail Nanjiani (“The Big Sick”). But the thin and familiar story gets thinner and thinner as it grinds to its contrived conclusion.

It does start well with a violent, action-packed bang, as Bautista playing rough copy Vic and his partner Sara (Karen Gillan) chase down a dangerous heroin dealer named Teijo (Iko Uwais).  But things get more and more silly as Vic commandeers an Uber driven by the meek and mild Stu (Nanjiani). His electric car almost manages to last long enough for the “Collateral” style adventure, as Vic, who is unable to see clearly following LASIK surgery, clumsily searches for Teijo.

Saddling action star Bautista with vision problems might have seemed funny and masterful on paper, but it’s really frustrating to watch.  The big guy, who is already not too graceful, intentionally stumbles and bumbles his way through every scene. To Bautista’s credit, he is completely devoted to the role, which has him falling down and bumping into almost everything in arm’s length.  His real bruises must have been numerous. Nanjiani does his best with the uneven comedy, the best of which has been spoiled in the trailers, including the red band versions.

Pairing a talented comedian with a budding action superstar works despite the derivative genre limitations of “Stuber.” The film leaves us wanting to see both actors in vehicles with more horsepower.

Opening in limited release is director Lynn Shelton’s latest dramedy.  Shelton is the filmmaker whose eclectic films include the edgy “Humpday.” “Sword of Trust” stars comedian Marc Maron, who along with others comes into possession of an antique sword that is believed to be proof that the South won the Civil War.  Well, obviously, this is a comedy, as the trek is on to find an appropriate buyer for such an oddity.

Shot in Newnan, first-time director Joseph Cross celebrated the town when he attended a Q&A at this year’s Atlanta Film Festival for the Georgia premiere.  And our area plays a prominent role in the fun coming-of-age story about young people finding some direction in their lives over the course of one hot summer night.  The cast is strong led by Analeigh Tipton as Mel, a girl who discovers that she is pregnant at the beginning of the film. Netflix star Lana Condor (“To All the Boys I’ve Loved Before”) has a prominent role, along with popular actress Victoria Justice.  Full disclosure: part of the film was shot in my home, which was really special.

Perhaps the best live-action adaptation of a Disney animated classic was 2016’s “The Jungle Book.”  And director Jon Favreau (“Iron Man”) is back this time taking on one of the Mouse House’s biggest and most well-thought of properties.  “The Lion King” won two Oscars back in 1994 for song (Elton John and Tim Rice’s “Can You Feel the Love Tonight”) and for Hans Zimmer’s original score.  If this remake is anything like Favreau’s approach to “Jungle Book,” expect less emphasis on music and more on the story and the stunning realistic animal animation.  Voice cast is your typical A-List affair, with Donald Glover lending his pipes to the lead cat Simba.

Once Upon a Time… in Hollywood

Quentin Tarantino has in recent interviews hinted that this might be his last film.  Theoretically, it could be considered his tenth, but the “Kill Bill” films have been collectively counted and it’s pitched as his ninth feature.  And let’s not forget that he’s been teasing a “Star Trek” script idea for a while now that has been getting some notice. The director has always promised to retire after making ten films.

“Once Upon a Time… in Hollywood” is about two guys, played by Leonardo DiCaprio and Brad Pitt.  DiCaprio is a fading cowboy star named Rick Dalton and Pitt is Cliff Booth, a stuntman and Dalton’s best pal.  While attempting to still make it in a changing Hollywood, Booth runs across Charles Manson and his murderous cult. Dalton just happens to live across the street from director Roman Polanski and his wife Sharon Tate (Margot Robbie).  Students of history already can see where this one is headed, but Tarantino’s work is never predictable. The film features the filmmaker’s typical eclectic actor collection and, sadly, we get the final appearance of beloved actor Luke Perry.

I was lucky enough to spend a lot of the Fourth of July binging the third and likely final season of Netflix’ sensationally popular series “Stranger Things.”  Having made a promise to my 15-year-old daughter, who faithfully follows the entire teen cast on social media, we sat down and gorged on the show.

The retro narrative starts strong by focusing on the kids as they come of age.  Chief Jim Hopper (David Harbour) is struggling to deal with the growing romance between Eleven (Millie Bobby Brown) and Mike (Finn Wolfhard). But as mundane life resumes, Joyce (Winona Ryder) just can’t ignore signs that the Upside Down creatures still threaten.  Of course, while teen comedy would be enough, the supernatural horror elements drive the action forward. And in no time, the adventure takes flight.

Taking place over the course of what seems like a day or two, getting to the thrilling conclusion isn’t as satisfying as previous seasons.

The multiple-character narrative constantly cuts between various locations, which gives the viewer little time to breathe.  And a throwback 1980s type subplot involving Russians is less than credible. Still, if you love the characters, you’ll definitely want to check this season out.

Future Gardeners train through ‘I Can Garden ...