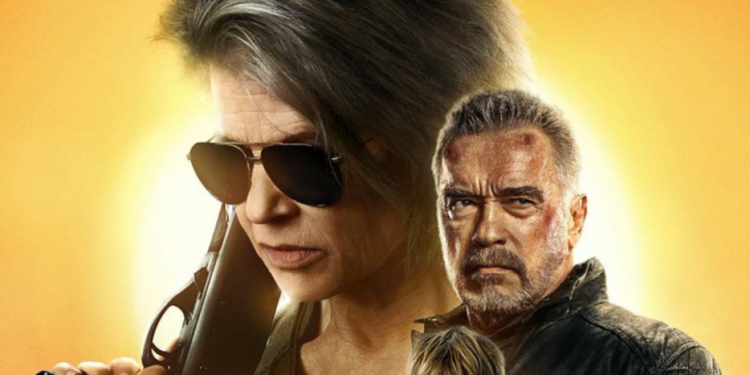 Terminator: Dark Fate – 8/10 – After three limp sequels that failed to carry the franchise effectively into the future, finally, they get it right. By bringing back Linda Hamilton as Sarah Connor, this sixth entry has real weight. Merely recasting the role of Connor wasn’t enough, Hamilton has a special spark, and in “Dark Fate,” it’s a kind of magic.

The story might seem familiar, but it’s not tired or stale. The screenplay credited to three writers (David S. Goyer, Justin Rhodes, and Billy Ray) knows the original Terminator mythology perfectly. In the future, the machines have taken over, and a small group of humans have started fighting back. But the devices have a secret weapon, time travel. And a new terminator, the Rev-9 (played coldly by Gabriel Luna), has been sent to the past to kill a young woman named Dani (Natalia Reyes). But the humans have their weapon in the form of the mechanically enhanced Grace (a badass Mackenzie Davis). The plan is to keep Dani alive.

Of course, Grace can’t do the job alone, especially given the liquid metal abilities of a non-stop killer Rev-9. That’s where Sarah Connor (Hamilton) comes in to do what she does best: kill terminators. Along the way, they might just run across an old T-800 (Arnold Schwarzenegger).

“Dark Fate” is impressive, but the action sequences, which are just fine, aren’t the reason to see the movie. It’s all Hamilton, reprising the role that helped make her career. And this time, Connor’s a grizzled veteran with an even bigger ax to grind than ever before. She carries a big stick too, toting around a host of weapons, expertly putting them to work.  When she and Schwarzenegger are on screen together, I got a lump in my throat. And I’ll bet that I’m not the only one.

Movies to Watch: The Irishman (11/27) – Director Martin Scorsese might have it in for Marvel movies. But while calling the effects-heavy films “amusement parks,” he’s not shying away from using the modern tools in his kind of cinema. And in his epic “The Irishman,” he marshals the new toys to de-age his go-to actors Robert De Niro, Joe Pesci, and Harvey Keitel. It’s hard to believe that this will be the first time that Scorsese has directed Al Pacino. And in this film, the great, 79-year-old actor gets the de-aging treatment to become a 49-year-old Jimmy Hoffa. Reviews have been glowing. But with the quick jump to streaming, after a limited theatrical run, the question is whether the three and a half hour movie will be rewarded by the Academy when the golden statues are handed out next year.

Movie to Watch: The Report (11/29) Fix Rating – 7/10 – After making its theatrical awards run on November 15, this recent history, dramatic thriller hits streaming. “The Report” has Adam Driver playing US Senate staffer Daniel J. Jones, who led the investigation into the CIA’s post 9/11 Detention and Interrogation Program. While this is a skillfully made movie, the parody like atmosphere is hard to shake.  Annette Bening plays Senator Dianne Feinstein. Actor Ted Levine is John Brennan, who viewers will recognize from the 24-hour news cycle. Because these real people are so well-known to us today, you might spend your time noticing the uncanny mimicry rather than focusing on the story.

Watchmen: Season 1 (now streaming) Fix Rating – 9/10 – This great show just might be HBO’s ace in the hole, especially now that the prequel to “Game of Thrones” has been scrapped.

His Dark Materials (series premiere 11/4) – After the monumental flop of 2007’s “The Golden Compass,” another adaptation of Philip Pullman’s best-selling fantasy trilogy was thought to be inconceivable. But HBO appears to have jumped into the Pullman “Dark Materials” world with both feet, assembling a great cast including Ruth Wilson (see “Luther” and “The Affair”), Lin-Manuel Miranda, and James McAvoy. The coming of age story is about two children who wander through parallel universes. The trailers look exciting.

Castle Rock: Season 2 (now streaming) Fix Rating – 7/10 – An improvement on the first season, this dive into the Stephen King multiverse makes for spooky viewing as Lizzy Caplan takes on the role of Annie Wilkes.

Dollface (November 15) – Ever “liked” an ex’s photo on Instagram accidentally. You can “unlike” it, but already, the damage is done. The utterly likable Kat Dennings plays Jules, a young woman who is dumped by her long-time boyfriend and decides to reconnect with friends. Based on the trailers, this one is a little bit whimsical, with fun fantasy sequences.

Apple TV+: Available on November 1 for $4.99, Apple is betting that you might want to try something different. Next month, The Paper will include Apple TV+ and Disney+ in its monthly coverage. I’m most excited about “The Morning Show,” led by Jennifer Aniston, who plays television morning show host Alex Levy. After the firing of her co-host, Mitch Kessler (Steve Carell), Levy is forced to reinvent the show. And the executives, concerned that Levy might be “past the sell by date,” decide to spice things up by bringing in a new, “younger” co-host named Bradley Jackson (Reese Witherspoon). In reality, Witherspoon is just seven years younger than Anniston, but in the trailers, the disparity seems to work. Count me in on this one.

Disney+: Available starting on November 12 for $6.99 per month or $69.99 per year, there are several reasons to sign up for the Disney streaming service, but none more compelling that season 1 of “The Mandalorian.” This “Star Wars” inspired series is about a Boba Fest-type bounty-hunter played by Pedro Pascal (see “Game of Thrones” and “Kingsman: The Golden Circle”). The trailers tease a familiar world but with a harder edge, as the Mandalorian appears to face elements of the Empire.

Parasite (now playing) – Fix Rating 10/10 – Directed and co-written by Joon-ho Bong, whose previous films have always dealt with class disparities (see “Snowpiercer”), “Parasite” is his most subtle and accomplished work to date. For those of you who struggled to stay with his whimsical “Okja” or just saw “The Host” as a monster movie, this film forces viewers to focus on the characters, their relative positions, and motivations. And while there are thrilling flourishes, “Parasite’s” dramatic weight isn’t undercut by any camera tricks or special effects.

The outstanding Korea-set film follows the poor Kim family as they fake their way into the lives of the wealthy Park family. They plan to infiltrate not as a family unit, but as four unrelated people who casually know each other. The question is, how long can the deception be maintained?

“Parasite” is a timely commentary about our era of the classist “gig” economy, in which the transactional overcomes decency and humanity. The Kim family’s desperate deception shouldn’t be surprising in this time of minute-long attention spans when Twitter defines our identities with masked, digital personas. Do you, for example, know the person who delivers that Big Mac and fries via Grub Hub? Do you even care?