View from the Pines: People now are just ‘Mean’ 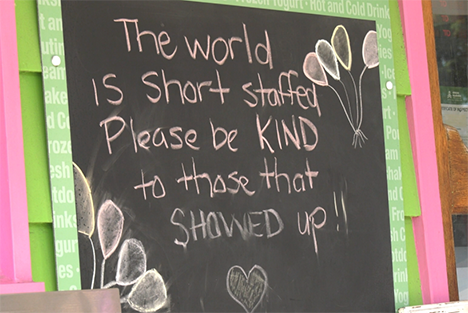 For a while I thought it was just me, but the more I get out, I realize that the world is full of people who are just acting MEAN. Social media (which I can’t stand) is full of stories and video clips of people just acting like complete fools.

Pitching fits in public, abusing waiters and servers, slapping flight attendants and “Karens” stalking people and knocking on neighbor’s doors to complain about the direction the leaves are raked in, have become more common than not recently. Well, as usual, I have a theory.

One of the side effects of being cooped up for a year and being restricted in our social interactions is that we’ve been forced to resort to using social media and other forms of electronic communication. Facebook and other outlets have provided us with a platform where it is acceptable to say anything to and about anybody that we want to say.

After spending a year and half in that world we have finally ventured out and tried to create a real life again, but some people have not adjusted to the fact that, in the real world, you just can’t run around doing and saying whatever pops into your head. The truth is, it’s rather presumptuous to think that anybody really gives a flip about what you think about anyway.

But I think it goes even deeper than that. We have all been forced to spend a great deal more time with ourselves than with others. That has caused us all to have to self-examine and lots of people don’t like what they have found out about themselves. The problem is that self-examination with less than satisfactory results is not a license to attempt to straighten out everybody else in the world.

For years I’ve lived by a mantra that I think is very helpful in this present situation. “When someone’s reaction is not proportionate to the stimulus, it’s ALWAYS about them.” Maybe your neighbor did leave the trash can out on the street for three days, but knocking on his door and tongue lashing him is not the solution.  Next week I’m gonna leave it out on purpose.

As we enter the Holiday season, I hope we can all take a step back and think about what we’ve been through, what we are thankful for and how we can best move forward to creating a new post-pandemic community.

Many times, the object of the wrath is not the person who can actually do anything about the problem. Businesses are short staffed, supplies are low, the government has subsidized laziness and people are dealing with issues that may be hidden to the casual observer. If you have a problem in a restaurant, generously tip the person who is willing to work and complain to the owner later. If you don’t like something on your flight realize that you are wasting your time abusing a flight attendant or gate agent, and if you see somebody park improperly just let it go.

Before you lash out, remember the problem might be you. As RuPaul says, “If you don’t love yourself, how the hell you gonna love anybody else?”

The Journey: The powerful difference when using ...