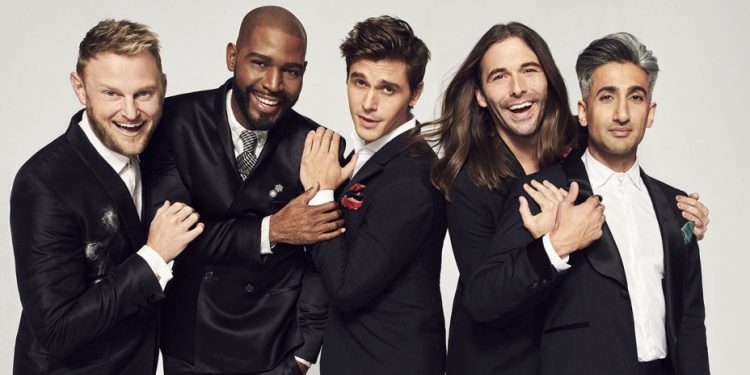 What to Binge: Queer Eye (June 15th) – The Netflix reboot of Bravo’s “Queer Eye for the Straight Guy” became a major hit for the streaming giant.  Therefore, another season was guaranteed. In season 2, the guys take on the style woes of a trans person, a first for the franchise.

What Movie to Watch: Cutie and the Boxer (June 14) – This 2013 documentary about New York husband and wife artists Ushio and Noriko Shinohara is a real treat. Ushio pioneered the art of boxing painting, which involves donning boxing gloves to literally punch the paint on the canvas.  But his talented wife has plans of her own. The conflict between the two, who have had a rocky relationship, is moving and insightful.

What to Avoid: Righteous Kill (June 1) Simply put, watch “Heat” instead.  The idea of pairing “The Godfather: Part II” actors together for a gritty crime procedural might look good on paper, but in practice, it failed to take maximum advantage of the magnetic qualities of its stars.  But if you really need to see Robert De Niro and Al Pacino mixing it up on screen, check out Michael Mann’s “Heat.” And you won’t have to wait that long (next year) to see them together in “The Irishman,” Martin Scorsese’s next film about Jimmy Hoffa (Pacino) and his alleged killer Frank Sheeran (De Niro).

What to Binge: Leprechaun series – Your wish has been granted. In all its awfulness, every “Leprechaun” film (7 total) are streaming on Amazon this month.  That’s right, you can watch the first one starring none-other-than Jennifer Anniston and Warwick Davis and trace the storied history of the wacky franchise through “Leprechaun: Origins.”  Watch the Leprechaun go to space and back to the hood, along the way, comically killing those that probably have it coming.

What Movie to Watch: Bad Lieutenant: Port of Call New Orleans (June 1) – This surprisingly entertaining sequel to the Abel Ferrara 1992 NC-17 rated movie that originally starred Harvey Keitel might bear the “Bad Lieutenant” name, but it is a completely different animal.  Other than the title, both movies share lurid settings, this one set in Louisiana, and crooked cop subject matter. Nicolas Cage is good as a double police detective. Werner Herzog directs.

What to Avoid: Allan Quatermain and the Lost City of Gold (June 1) – Since you’ve gotten enough cheese by binging each and every “Leprechaun” film, there is no need to revisit “Allan Quartermain.”  This exploitive adaptation of the H. Rider Haggard novel that was a sequel to the equally laughable film “King Solomon’s Mines” was an attempt to jump on the “Indiana Jones” bandwagon. Richard Chamberlain and Sharon Stone star.

What to Binge: Cloak & Dagger (June 8) This Freeform series comes to Hulu after its June 7th premiere.  And while you can’t exactly binge this appointment television series, you can play catch up on Hulu if you are a cord-cutter.  “Cloak & Dagger” are a part of the Marvel universe that I fondly remember, having kept my copies of the original 1980s limited comic book series.  The story follows two teens who are drawn together as they discover themselves burdened with superpowers. The comedy is gritty and deals with drug abuse and inner-city issues.  One wonders if the dark tone of the source can be preserved on TV.

What Movie to Watch: Spawn – Long before “Deadpool” made R-rated comic book movies cool, 1997’s “Spawn” ventured into dark almost horror territory to bring Todd McFarlane’s hero to the big screen.  And the film was pretty shocking in that the effects were impressive for the time. Talk is that McFarlane is now rebooting “Spawn” with Jamie Foxx in the lead as a Blumhouse superhero horror film.  The “Spawn” story is about a mercenary (played by Michael Jai White), who is killed and then becomes the soldier of the Devil.

What to Avoid: 1492: Conquest of Paradise – Year’s before “Gladiator,” director Ridley Scott found himself on the losing end of a sizably budgeted historical epic about Christopher Columbus (played by French actor Gérard Depardieu).  While the film has its defenders, it was a huge box office flop and audiences failed to endorse it. There are so many better Scott films to watch, this shouldn’t be the one to consume your evening or even your Sunday afternoon.

HBO: Westworld – Both second seasons of “Westworld” and HULU’s “The Handmaid’s Tale” are hard to watch, but they are impossible to just give up.  With “Westworld,” season two is a complete labyrinth. The confusing narrative takes place in different times and, possibly, places.  The synthetic characters impossibly meld with the flesh and blood variety. It’s really messy. Of interest are two episodes where some of the characters leave the old West setting and find themselves in a Japanese shogun environment.  But while the story is so frustrating that you will need a cheat sheet, it is never boring.

Part documentary, part thrilling narrative feature, Bart Layton’s cautionary tale takes a real life event and uses the actual players to explain and dramatically recreate a terribly stupid crime.  When college students Spencer Reinhard (Barry Keoghan) and Warren Lipka (Evan Peters) decide to spice up their lives by committing a little heist, they have no idea what they are really doing. Their bright idea is to steal rare and priceless books from the university library and fence them.  It’s a simple plan but not one to be carried out by criminals-in-training.

“American Animals” uses a hybrid approach by using interviews with the real perpetrators (Lipka, Reinhard, Allen, and Borsuk) to tell the story of a botched robbery from four different points of view.  Ultimately, we know the theft was a failure and the foursome were caught and prosecuted, but what really happened? Well, that depends on who is on camera. It’s a fascinating followup for filmmaker Layton, whose last film was the fantastic “The Imposter.”  Blake Jenner is also in the cast.

While “Jurassic World: The Fallen Kingdom” opens on June 22, I suspect that “Incredibles 2” will continue to have bite in its second weekend.  After waiting 14 years, we finally get a sequel to Pixar’s wonderful “The Incredibles.” The first superhero family is back and this time Mr. Incredible (Craig T. Nelson) has to play Mr. Mom, as wife Helen (Holly Hunter) aka Elastigirl is called back into action.  But saving the world might be easier than taking care of Jack-Jack, as his destructive powers continue to develop.

The View From The Loft