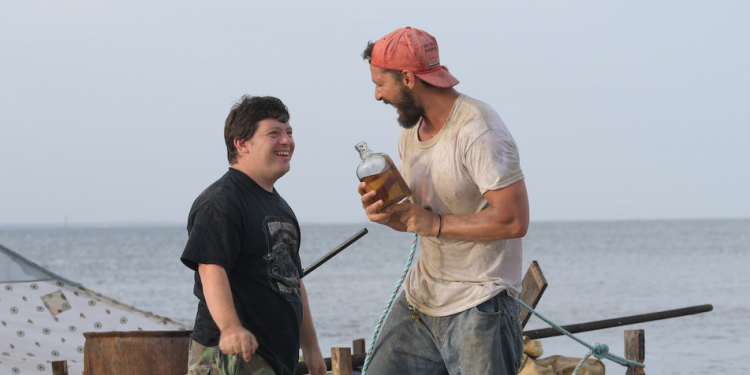 The Peanut Butter Falcon – Fix Rating 8/10
Something of a modern take on “Adventures of Huckleberry Finn,” this film has 22-year-old Zak (Zack Gottsagen), who has down-syndrome, escaping from a nursing home and venturing out into the great unknown. Once on the outside, Zak encounters Tyler, and the two go on an adventure.

Now Playing – It Chapter Two
The followup to the 2017 film, “Chapter 2” picks up twenty-seven years later when a devastating phone call brings the club back together.  Pennywise has returned, and the kids, now all grown up, have to reconvene to take the snaggletoothed villain out.

Now Playing – Hustlers
Jennifer Lopez stars along with Constance Wu (“Crazy Rich Asians”) and others in this story torn from the pages of a New York Magazine article.  The trailers pitch this as a kind of “Ocean’s Eight” heist film set in the world of strippers.

September 20 – Rambo: Last Blood
Sly Stallone returns for one last turn as his action hero. Directed by Adrian Grunberg, who gave use the entertaining Mel Gibson film “Get the Gringo” back in 2012, this final Rambo adventure involves a rescue mission in Mexico where a cartel is holding a friend’s daughter.

Downton Abbey
The popular television series returns, but this time in a feature length theatrical motion picture.  The Crawley family and their servants must work together to prepare for the blessed event. Expect upstair/downstairs drama.

September 27 – 21 Bridges
Chadwick Boseman (“Black Panther”) stars as a police detective hot on the heels of criminals who killed some fellow officers.  In order to catch the killers, the entire city is temporarily closed (all 21 bridges) trapping them.

Abominable
This animated family film from Dreamworks is about a girl who finds a magical Yeti on the roof of her apartment building, and then goes on an international journey to take the creature home.  Of course, there are dark forces trying to capture the furry beast. The animation looks similar to the techniques employed in the “How to Train Your Dragon” franchise, and the soundtrack is heavy on pop tunes.

Linda Ronstadt: The Sound of My Voice (Now Playing)
This documentary celebrates the career of the iconic Linda Ronstadt from when she burst onto the music scene in 1967 through her 10 Grammy awards.  Along with archive footage and the famous tunes, we hear insight from some of her collaborators including Dolly Parton, Emmylou Harris, Bonnie Raitt and Jackson Browne.

Tigers Are Not Afraid (September 27) – Fix Rating 8/10
This Mexican horror film is a dark fairy tale for our modern times.  The story has a group of street children, who have been orphaned by the ruthless actions of a drug cartel, going on the run when they steal a cell phone with incriminating video and photos on it. But as the cartel pursues them, the kids get some help from supernatural forces. Gritty and creepy, “Tigers Are Not Afraid” is a unique look at the collateral damage of the drug trade.

••••••••••••
Jonathan W. Hickman is an entertainment attorney, filmmaker, college professor, and novelist. More about Jonathan can be found by visiting: filmproductionlaw.com.

The cost of complacency: How auto-pay can ...