The Film Fix: Review of Spider-Man, Selects from Netflix, Amazon and Hulu 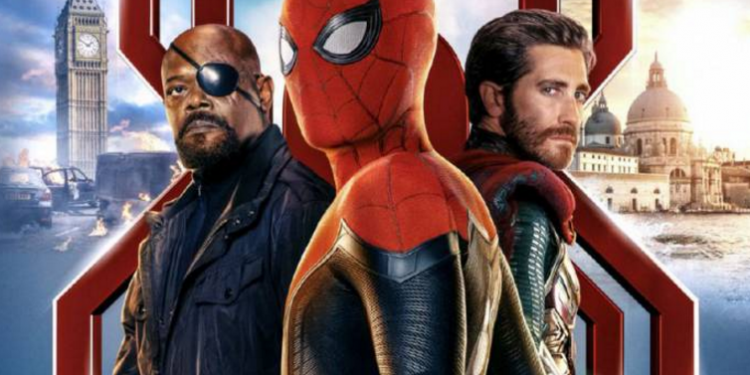 Below are reviews of both big-screen and streaming options fans will have this month.

A necessarily “bridgy” affair, “Spider-Man: Far From Home” manages to bring together the traumatic events of “Avengers: Endgame” and hint at what’s next for the MCU.

Tony Stark may be no more, but Peter Parker (Tom Holland) still grieves.  And even though he just helped save the world, for teen Peter, it’s back to high school.  His five-year absence has been described as a “blip.” And “blipped” with him for five years was his best friend Ned (Jacob Batalon), his love interest Michelle “MJ” Jones (Zendaya), and school bully, but Spider-Man super fan, Flash Thompson (Tony Revolori).  Along with other teens, they venture to Venice for a summer trip that’s chaperoned by science teacher Mr. Bell (a funny J. B. Smoove) and the bumbling, clueless Mr. Harrington (Martin Starr).

Of course, the world will need saving again.  And when Happy Hogan (Jon Favreau) tries to get Peter to take an assignment from Nick Fury (Samuel L. Jackson), Pete sends the SHIELD chief to voice mail.  But when a new threat emerges in the form of elemental monsters, Spider-Man has to suit up and join forces with new comer superhero Mysterio (Jake Gyllenhaal). With his friends in tow, the friendly neighborhood wall-crawler goes global.

Bursting with youthful exuberance and hipster flare, “Far From Home” is wondrous entertainment.  By keeping Parker still in high school, and using the “blip” to keep his core crew intact, what might seem like contrived manipulation holds together nicely.  This is a wildly over-the-top comic book adventure, after all, so a little artifice is expected.

But what works best is Holland’s boyish charm and innocence.  Having lost his father figure in the flawed but heroic Tony Stark, Peter is drifting.  His kind (and hot) Aunt May (Marisa Tomei) knows that her boy is hurting, but understands the old adage: “with great power there must also come – great responsibility!”  In raising Peter, May certainly did something right, because this is one boy who will adhere to that motto.

A joyful adventure that makes us believe in Spider-Man one more time, “Far From Home” capably begins the next phase of the MCU.

The cold shiver from a dead-eyed doll effectively extends the Conjuring universe.

When demonologists Lorraine and Ed Warren (played by Vera Farmiga and Patrick Wilson) take possession of the demonic doll Annabelle, they are forced to put in place protections aimed at containing its evil.  Of course, the doll is placed in the Warrens’ artifacts room in the basement of their suburban home (think a very Brady dwelling). And when they are called away on a job, they have to leave their young daughter, Judy (Mckenna Grace), at home with a babysitter named Mary Ellen (Madison Iseman). Annabelle seizes the moment, and that great terror might be released surrounded by a number of scary spirits just itching to steal your soul.

What to binge: Stranger Things: Season 3 (July 4) – I suspect that families will be binging this popular series over the July 4th holiday.  The continuing 1980s set story will lean heavily into the popular culture of the time. The first trailer introduced the retro shopping mall set, and the last trailer teases that this location will be ground zero for much of the action with the townsfolk doing battle against the monster from the upside down place.

What to avoid: Caddyshack 2/The Pink Panther 2 – These sequels are really the pits.  I’ve warned readers about the “Caddyshack” sequel before, but I can’t think of a worse pairing of it with the second “The Pink Panther” movie that came out in 2009.  While Steve Martin seemed like an inspired choice for bumbling Inspector Jacques Clouseau (taking over for the late Peter Sellars), he proves to be positively wince-inducing and just not funny.

What movie to watch: Shazam! (July 16) – If the latest Marvel “Spider-Man” entry shows us where the next chapter in the MCU is going, “Shazam” is proof-positive that DC is headed in a similarly goofy direction.  And “Shazam” is as fun as anything in the MCU. The sweet story has orphan Billy Batson (Asher Angel) taking control of a great wizard’s power and morphing into superhero Shazam (played by Zachary Levi) just by uttering the film’s title.

What to avoid: Hellboy (2019) – (July 23) –  This reboot effectively killed the “Hellboy” franchise.  Sadly, it also expended all the goodwill that Guillermo del Toro built with his first two movies featuring the comic book hero. Despite excellent casting of “Stranger Things” star David Harbour and an R rating, this outing of the horned, demonic character is boring, poorly paced, and incompetently designed. Do not pay money for this film!  Instead, watch (or rewatch) the first two Hellboy adventures.

What to binge: Veronica Mars – Season 4 (July 26) –  The 2004 television series starring Kristen Bell gets a fourth season. The show, originally aimed at the YA crowd, had the young Veronica helping her private detective father solve crimes.  After three seasons, the critically regarded series was cancelled. But in 2013, star Bell and creator Rob Thomas revived “Mars” as a feature motion picture by raising much of the production budget on the crowd-source platform Kickstarter. This new season spans 8 episodes.

Once Upon a Time … in Hollywood (July 26) – Billed as Quentin Tarantino’s ninth film (the “Kill Bill” films are collectively counted), this movie generated controversy at Cannes when Tarantino had to answer questions about Margot Robbie’s role.  Robbie plays a version of the late Sharon Tate in the film, and when a reporter asked him about her allegedly small number of lines, he rejected the premise of her question. Naturally, this set off a backlash, especially given his former relationship with disgraced producer Harvey Weinstein.

But from the trailers, it’s clear that the movie is about two guys, played by Leonardo DiCaprio and Brad Pitt.  DiCaprio is a fading cowboy star and Pitt is the stuntman and best friend. While attempting to still make it in a changing Hollywood, the two run across Charles Manson and his murderous cult. The film features Tarantino’s typical eclectic actor collection and, sadly, we get the final appearance of beloved actor Luke Perry.

Midsommar – Fix Rating 7/10 (July 5)  – I’ll defend this one as an almost masterpiece, but viewers be warned, “Midsommar” isn’t your standard horror flick.  If you were brave enough to catch writer/director Ari Aster’s last cinematic chiller “Hereditary,” then you might be prepared for this one. By comparison, Aster has gone bigger with this narrative, while still very much focusing on the lingering effects of family trauma and tragedy.

When Dani (Florence Pugh) experiences an unspeakable family disaster, she decides to go on a trip with her boyfriend, Christian (Jack Reynor), and his pals.  This takes them to an idyllic comune somewhere in rural Sweden. But what was immediately a beautiful paradise slowly is revealed as something still idyllic but at a deadly price.

Elements of 1973’s “The Wicker Man” are blended with Aster’s uncompromising and timeless examination of grief and our personal coping methods. “Midsommar” isn’t for the squeamish, but it will certainly stay with you for days thereafter.

Toni Morrison: The Pieces I Am – Fix Rating 8/10 (playing now) – This incredibly detailed and informative documentary about one of America’s finest writers will make you want to pick up several of Morrison’s novels.  Much of the film is told in the author’s own words, as she sits down with filmmaker Timothy Greenfield-Sanders for a series of detailed interviews. One story that hit me was the writer talking about a letter she received from a prison informing her that one of her books was banned out of fear that it might cause a riot.

Ruth Whitaker selected as Artist of the ...

Safety should always be a priority when ...

Click the link in our bio for the full story #covi