The Film Fix: What’s Streaming and on the Big Screen in November 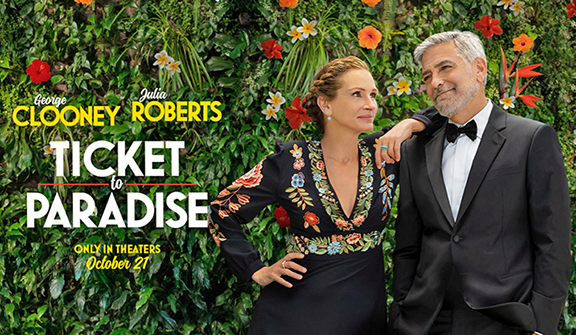 Ticket to Paradise (now playing) – No Fix Rating 5/10 – “Ticket to Paradise” is the blandest comedy to be widely released in years. Aside from a blurted-out F$#$ bomb, some innocuous drinking, and veiled mention of sexuality, the movie barely qualifies for its PG-13 rating.

George Clooney and Julia Roberts are charming as ever, but their chemistry only carries the film so far. And because the narrative is overly twee and sentimental, the insincerity of the entire project shines through. The movie needed to be meaner and edgier to generate the required tension to make us care about the character’s plight.

Black Adam (now playing) – Fix Rating 6/10 – Comparisons to MCU projects complicate the success of “Black Adam.”  It’s hard to shake the feeling that this film feels like an imitator. If there is a difference, it’s the renewed commitment to the Zack Snyder visual style that features high-contrast images and the abundance of slo-mo.

“Black Adam” is a palatable event film. Still, if the DC cinematic universe is to compete in the crowded superhero marketplace, it will need to give us something unique that engages visually and emotionally. And that will inevitably be another outing for the Man of Steel

The Banshees of Inisherin (now playing) – Fix Rating 9/10 – Colin Farrell and Brendan Gleeson make a fantastic team. And this time around, writer/director Martin McDonagh (see “In Bruges”) isolates them on an Irish island, where they play lifelong besties, whiling away their days with a good pint in hand. But one afternoon, the elder and more sophisticated Colm (Gleeson) tells Pádraic (Farrell) that he doesn’t want to be friends with him anymore. This nuanced tale of aging and friendship makes “The Banshees of Inisherin” one of the year’s most sincere and meaningful films.

A Christmas Story Christmas (November 17) – By bringing back Ralphie (Peter Billingsley) and other original surviving cast members, this follow-up to the late director Bob Clark’s beloved 1983 holiday classic “A Christmas Story” appears to be a faithful continuation. The narrative has the adult Ralphie returning to the old house on Cleveland Street to give his children a Christmas as memorable as those he had as a child. Along the way, he will reconnect with his past and confront his father’s death.

Falling for Christmas (November 10) – Remember Lindsay Lohan? Even though she’s been working steadily over the last few years, her off-screen struggles effectively pulled her from many higher-profile opportunities at the peak of her career. With “Falling for Christmas,” the 36-year-old “Mean Girls” star falls into the irresistibly cheesy Netflix holiday movie rotation playing a newly engaged heiress who gets amnesia after a skiing accident. When no one looks for her, she is naturally befriended by a handsome, single (of course) man and his daughter. Amorous sparks fly in this familiar looking (but how can you not watch) festive rom-com.

Wednesday (November 23) – It’s impossible not to get a little excited about Tim Burton directing all eight episodes of this “The Addams Family” spin-off focusing on the precocious Wednesday (Jenna Ortega). And the casting looks fantastic, with Catherine Zeta-Jones and Luis Guzmán playing Morticia and Gomez. Even Christina Ricci, who once played Wednesday in the 1990s adaptations of the long-running television series, gets in on the fun in this edgy-looking update.

Willow (season 1, November 30) – I’ve seen three episodes of this handsome series continuation of the 1988 Ron Howard film. It picks up years after the events of the movie. Warwick Davis returns as the title wizard, who must go on another quest that will test his magic ability. Joanne Whalley returns as Sorsha and is joined by new faces Erin Kellyman, Ellie Bamber, Ruby Cruz, and Spider-Man star Tony Revolori. Of the new cast, I’m most impressed by Amar Chadha-Patel, playing a brutish protector ordered to accompany Willow and the others as they try to save their world.

While the film provides a prestige project for Styles to showcase his acting chops, it can’t distinguish itself from other productions that grapple with that dark time in British history.

Black Panther: Wakanda Forever (November 11) – Early word on this sequel to the ground-breaking “Black Panther” call it “epic” and “exhilarating,” while it also searches desperately for the right tone to handle the loss of star Chadwick Boseman. The story focuses on how Wakanda can maintain its sovereignty following the loss of its king T’Challa (played in the 2018 film by Boseman). Director Ryan Coogler returns along with many of the original cast members. The nagging question on everyone’s lips is: who will be the next Panther?

The Fabelmans (November 23) – Winner of the People’s Choice Award at this year’s Toronto International Film Festival, “The Fabelmans” might be Steven Spielberg’s most personal film. The semi-autobiographical story concentrates on the title family as the young Sammy Fabelman (Gabriel LaBelle) copes with problems at home by leaning on his love of movies. Michelle Williams plays the mother who inspires Sammy to pursue his dreams, while his father (played by Paul Dano) focuses on more concrete realities. “The Fabelmans” is already touted as the front-runner for many awards, including the best film of the year.

Jackson Street Notes: ‘I am being blackmailed’