The History: 25th Anniversary of the 1996 Olympic Games in Atlanta 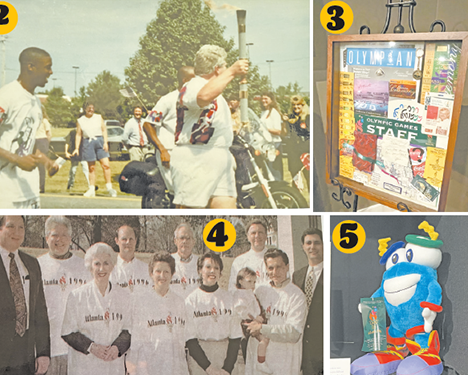 After being postponed a year due to the COVID-19 pandemic, the Tokyo 2020 Summer Olympics will finally host its opening ceremony on Friday, July 23, 2021. This year’s summer Olympics holds a special commemoration as it also marks the 25th anniversary of the1996 Olympic Games in Atlanta.

The 1996 Olympic Games were certainly a historic event as the Games were also the 100th anniversary of the modern Olympic Games. Atlanta was a surprising choice to host the Centennial Celebration, selected over Athens, Greece. Atlanta took their role as host seriously and ended up hosting one of the most extravagant Games in Olympic history. In preparation of the Games, downtown Atlanta saw much building development. Centennial Olympic Stadium, an 85,000-seat stadium, was built to host the main events. After the games, the stadium was renovated for use by Atlanta Braves as Turner Stadium and again for Georgia State University as Center Parc Stadium.

Centennial Olympic Park and the Olympic Village, now part of Georgia Technical Institute Housing, was also brought downtown. When the Games finally opened on July 19, 1996, the city held a five-hour opening ceremony complete with a “country fair’ atmosphere. Costs for the games had reached nearly $1.7 billion dollars, all privately and corporately sponsored as the 1996 Games was the first time the Olympics received no governmental financial support.

The Games itself ended up being quite a success. For the first time, all countries invited to participate in the Games did so. Over 10,000 athletes from 197 countries competed in 271 events in 26 sports. There were 24 countries that made their Olympic debut including 11 countries previously part of the ex-Soviet Union. The US Olympic Team won a total of 101 medals – 44 gold, 32 silver, and 25 bronze. Sports to debut in 1996 included softball, beach volleyball, mountain biking, women’s soccer/football and lightweight rowing. The US Olympic Team won its first gold medal in women’s team sport with the victorious gymnastics team later referred to as the “Magnificent Seven.”

Unfortunately, the Centennial Games was marred by tragedy when a pipe-bomb exploded in Centennial Olympic Park in the early hours on July 27. A homemade pipe bomb spiked with nails and screws exploded at 1:25 a.m. during a free rock concert killing Alice. S. Hawthorne of Albany, GA and injuring at least 111 other people. A Turkish television cameraman died of a heart attack while running to cover the blast.

Despite both the excitement and devastating shock that occurred during the Centennial Olympics, the games brought pride both nationally to the United States and locally to the state of Georgia. Local towns got involved in celebrating the event and Newnan was no exception. Many Newnan citizens proudly volunteered at the event, attended the Games, and participated in the Olympic Torch Relay which passed through the Newnan area.

The Olympic Torch Relay is the ceremonial relaying of the Olympic flame from Olympia, Greece, to the site of an Olympic Games. It was first performed at the 1936 Summer Olympics and has taken place prior to every Games since. In 1996, the Olympic flame landed in Los Angeles California on March 10, 1996, and made a 16,669-mile trek across 42 states and over 12,000 torch bearers to get to Georgia. In Newnan, several citizens acted as torchbearers including John Thrasher who carried the torch for about 1/6th of a mile on Bullsboro Drive and acted as Field Marshal for the Games.

While we will probably not see the Olympics return to Atlanta, we can certainly remember the excitement that it brought to our state and commemorate the American athletes headed to the games on this anniversary of those Centennial games. GO TEAM USA!

NOW ON DISPLAY AT McRITCHIE-HOLLIS MUSEUM

Going for Gold, a temporary pop-up exhibit celebrating the 25th Anniversary of the Centennial Olympics is currently on display at the McRitchie-Hollis Museum. Visit the exhibit Monday through Friday from 9am to 5pm. Come celebrate the 2021 Summer Olympics and the 25th Anniversary of the Atlanta Centennial Olympics by attending Night at McRitchie-Hollis Museum on July 31 from 7 to 10 p.m. View our temporary Olympic exhibit “Going for Gold” and participate in some Olympic activities and games. Dressing in your best ’90s or Olympic Swag is encouraged. Drink tickets and snacks will be available for purchase. This is a 21+ event. 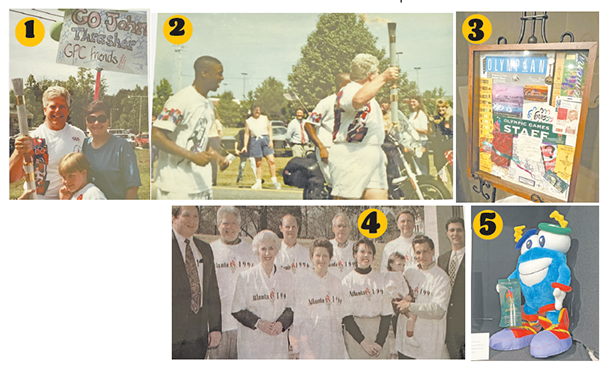 No. 1 – John Thrasher acted as a Field Marshal for the 1996 Olympic Games. He attended the opening and closing ceremonies in Atlanta and witnessed the US women’s Soccer Team take home the gold in the first women’s soccer event in Olympic history, held at UGA in Athens.

No. 2 – John Thrasher carried the torch about 1/6th of a mile on Bullsboro Drive as part of the Newnan area of the Olympic Torch Relay.

No. 3 – Welden Collection: Gary T. Welden served as an Associate Envoy during the Centennial Olympics. His collection is on display at the Going for Gold exhibit at the McRitchie-Hollis Museum.

No. 5 – Izzy: This commemorative plush is on display at the Going for Gold exhibit at the McRitchie-Hollis Museum.